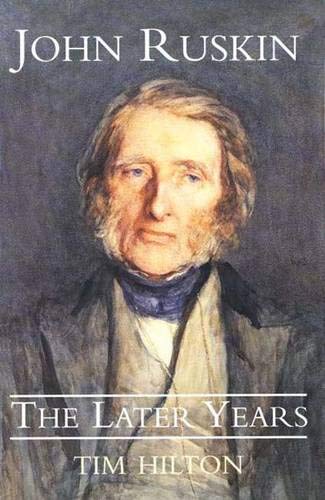 This is the authoritative biography of John Ruskin, the most influential nineteenth-century critic of art and society. It draws on the complete text of Ruskin's diaries and many thousands of unpublished letters and other documents to provide flesh insight into the background and content of Ruskin's numerous books.

Researching a biography of John Ruskin is a particularly useful project, given that, as Tim Hilton argues, "Ruskin's books are without exception personal; they were formed by the events of his life, his reading, his friendships and loves, dreams, travels and memories." Since Ruskin remains, with Thomas Carlyle andJohn Staurt Mill, one of the three most significant minds of Victorian Britain, the need for a good biography is a pressing one. Hilton's two-volume life is easily the best account of Ruskin's life we have.

This first volume is the smaller of the two: Hilton is upfront about "placing the emphasis on the later rather than the earlier years of Ruskin's life" and this means that volume one is a 280-page book as opposed to the 600-page volume two, John Ruskin Vol 2: The Later Years. But there's plenty of interesting material here and Hilton handles it all with an elegance and tact that smacks of an older, more gentlemanly age. An example is the way he relates the events of Ruskin's disastrous honeymoon. Ruskin's wife, Effie, was by general agreement unusually beautiful and intelligent, and it seems that Ruskin was genuinely in love with her. Yet their courtship was marked throughout by Ruskin's "neurasthenic depression" and the marriage remained sexually unconsummated. The traditional story is that Ruskin was too shocked to discover that women possessed pubic hair to proceed; Hilton demonstrates that it is a little more mysterious than this. Ruskin later wrote that "though her face was beautiful, her person was not formed to excite passion. On the contrary there were certain circumstances in her person which completely checked it." It's hard to imagine what these "circumstances" could have been. Effie later fell in love with and married John Millais, the Pre-Raphaelite painter, had several children and was very happy, so it seems unlikely that there was anything too unusual about her. The whole episode has such potential for lurid sensationalising that it is refreshing to read Hilton's restrained but illuminating account. --Adam Roberts

"The most readable and sympathetic [biography] that has yet appeared...This biography achieves perspective on its subject's character and achievement and on the well-known dramas of his domestic life." John Bayley, New York Review of Books "A stupendous biography." Fiona MacCarthy, The Times "The best life of the Victorian critic of art, architecture, and society we are likely to have for a long time." Washington Post Book World "Outstanding-beautifully written...loving but level-headed." John Gross, The Observer (Books of the Year) "A minor masterpiece of biographical writing." Roger Kimball, Architectural Record "Every serious scholar will have to acquire this volume, but even those who know practically nothing about Ruskin will find it enormously enjoyable." Quentin Bell, American Historical Review