Items related to Aspects of Aristocracy: Grandeur and Decline in Modern... 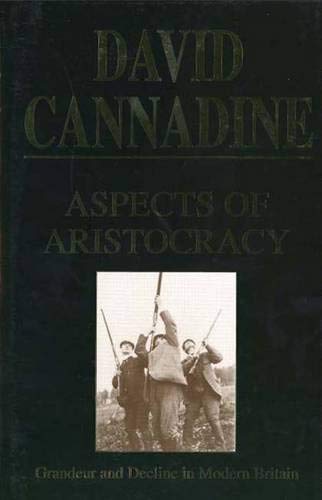 In this stylish and provocative book, the eminent historian David Cannadine brings his characterisitc wit and acumen to bear on the British aristocracy, probing behind the legendary escapades and indulgences of aristocrats Such as Lord Curzon, the Hon C.S. Rolls (of Rolls Royce), Winston Churchill, Harold Nicolson, and Vita Sackville -West, and changing our perceptions of them - transforming wastrels into heroes and the self-satisfied into tthe second-rate. Cannasine begins by investigating the land-owning classes as a whole during the last two hundred years, describing their origins, their habits, their increasing debts, and their involvement with the steam train, the horseless carriage, and the aeroplamne. He next focuses on patricians he finds particularly fascinating: Lord Curzon, an unrivaled ceremonial impresario and inventor of traditions; Lord Strickland, part English landowner and part Mediterranean nobleman, who has both an imperial proconsul and prime minister of Malta; and Winston Churchill, whom Cannadine sees as an aristocratic adventureer, a man who has burdened by more than he benefited fromhis family connections and patrician attitudes. Cannadiine then moves from individuals to aristocratic dynasties. He reconstructs the extraordinary financial history of the dukes of Devonshire, narrates the story of the Cozwns-Hardys, a Norfolk family who playeda remarkably varies part in the life of their country, and offers a controversial reapraisal of the forebears, lives, work, and personalities of Harols Nicolson and Vita Sackville-West- a portrait, notes Cannadine, of more than a marriage.

David Cannadine has taught at Columbia University, New York, where he is now Moore Collegiate Professor of History.