Defoe, Daniel A Tour Through the Whole Island of Great Britain

A Tour Through the Whole Island of Great Britain 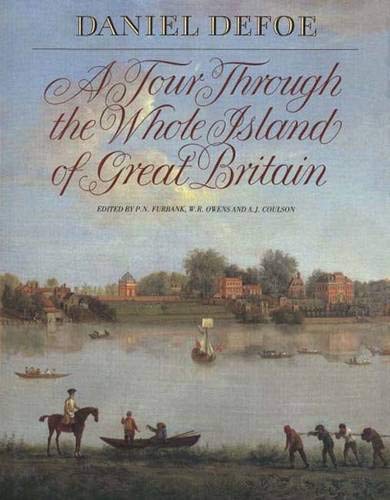 Defoe's "Tour Through the Whole island of Great Britain", first published in three volumes in 1724-26, is an account of 13 "circuits or journies" made by the renowned author of such books as "Robinson Crusoe" and "Moll Flanders". This abridged edition is also the first illustrated version. Defoe's famous text is now complemented by contemporary paintings, sketches, and engravings of places he visited, industrial processes, activities and events he described, and people he knew. Many of these illustrations are little known, and some have never before been reproduced. Defoe's "Tour" has been the most often-quoted source for early 18th century British social and economic history. It is also a very personal book, conveying a sense of "the romance of trade" as felt by an enthusiast at a time of rapid commercial expansion. Different from earlier (largely antiquarian) descriptions of Great Britain, it is based on more first hand knowledge, is better organized, and is written in a vigorous and subtly amusing style. An introduction to this edition outlines Defoe's life, locates the "Tour" among his other works, and reveals the extent of his involvement in the life of early 18th century Britain. Notes to the text and captions to the illustrations explain contemporary technical and industrial processes and historical allusions, identify people, and provide information on buildings and places.

Daniel Defoe (c.1660-1731), one of the most famous writers in English literature, was born in London, the son of James Foe, a butcher. It was Daniel who changed his name to De Foe or Defoe in about 1705. He was interested in politics and opposed King James II. After the Glorious Revolution in 1688 and William III was on the throne, Defoe became one of his personal friends. He became a writer for the government and a satircal writer on various social issues of the time. He turned to full time writing after hearing the inspirational story of a sailor who was rescued after living alone on a desert island in the Pacific, the result being his first novel ROBINSON CRUSOE. Several other adventure stories followed, including MOLL FLANDERS.

1. A Tour through the Whole Island of Great Britain: Abridged and Illustrated Edition

2. A Tour through the Whole Island of Great Britain: Abridged and Illustrated Edition

3. A Tour through the Whole Island of Great Britain: Abridged and Illustrated Edition

4. A Tour through the Whole Island of Great Britain: Abridged and Illustrated Edition