Items related to Hannah Arendt: For Love of the World

Young–bruehl Hannah Arendt: For Love of the World

Hannah Arendt: For Love of the World 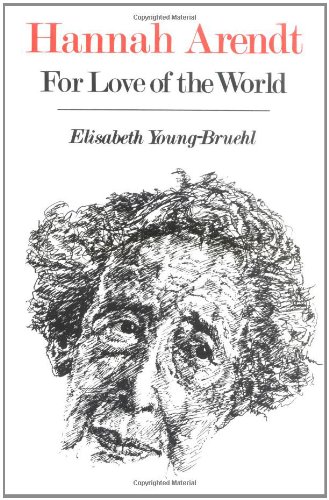 An in-depth biography of political philosopher Hannah Arendt traces her life from her childhood in Germany to her years in America, discussing the events and influences that shaped her work.

This highly acclaimed, prize-winning biography of one of the foremost political philosophers of the twentieth century is here reissued in a trade paperback edition for a new generation of readers. In a new preface the author offers an account of writings by and about Arendt that have appeared since the book's 1982 publication, providing a reassessment of her subject's life and achievement.
"Haunting and powerful, . . . [this book is an] exemplary adventure story engaging as well the life of the mind. . . . Young-Bruehl's accomplishment is of the highest order, and all of us who either knew Hannah Arendt of are acquainted with her writings owe an enormous debt to the author."--Norman Jacobson, University of California, Berkeley (on the earlier edition)
"Young-Bruehl gives us the story of a woman so thoroughly of her time and circumstances that she epitomizes a historical moment. . . . [Her] thorough, beautifully written, erudite presentation of Hannah Arendt wisely emphasizes her signal contribution to philosophy and to political theory."--Julia Epstein, The Philadelphia Inquirer (Books/Leisure) (on the earlier edition)
"Both a personal and an intellectual biography . . . It represents biography at its best."--Peter Berger, front page, The New York Times Book Review
"Indispensable to anyone interested in the life, the thought, or . . . the example of Hannah Arendt."--Mark Feeney, Boston Globe
"Philosophy is concerned with two matters: soluble questions that are trivial, and crucial questions that are insoluble. Hannah Arendt always knew the difference; her critics sometimes did. In the disparity lay the tragedies and consolations of a career still sparking debate 19 years after the appearance of her most controversial book."--Stefan Kanfer, Time (on earlier edition)
"Young-Bruehl portrays the thinker's personal life and intellectual development within the context of the historical, political, and philosophical issues which informed Arendt's life and work. Insightful commentary on 20th-century philosophy, Jewish self-awareness, politics and moral thought after World War II, and Arendt's relationship to other thinkers and writers (including Heidegger, Jaspers, poets and editors) makes this a particularly well-rounded biographical study. Highly recommended for academic and large public libraries."--Library Journal (on the earlier edition)
"A story of surprising drama . . . . At last, we can see Arendt whole."--Jim Miller, Newsweek

"In this scholarly and dramatic work, Elisabeth Young-Bruehl dramatically portrays one of the most prominent and controversial political philosophers of our time. . . . With a wealth of quotation, description, and explanation, Young-Bruehl . . . has created an intimate and powerful picture of Arendt, her work, and her world."--Lorraine Hermann, Christian Science Monitor (on earlier edition)
"Highly sympathetic [and] comprehensive. . . . Young-Bruehl has unearthed revealing new material."--Publishers Weekly (on earlier edition)
"She was a hero and a challenge: an impassioned advocate of public freedom, yet also a figure of Olympian reserve, imperious and remote. . . . Elisabeth Young-Bruehl, one of her former students, has written this first full-length biography based on extensive interviews and on her private papers. It is a story of surprising drama. . . . At last, we can see Arendt whole."--Jim Miller, Newsweek (on earlier edition)
"This volume deserves a wide, critical readership because it addresses Arendt's valuable 'philosophical' response to two monstrous totalitarian regimes: Communist Russia and Nazi Germany. . . . This book will be invaluable in clarifying how historical events affected some notable philosophical personalities. Highly recommended."--Choice (on the earlier edition)
"Illuminating."--Julie V. Iovine, Saturday Review (on the earlier edition)
"Elizabeth Young-Bruehl, a former student of Hannah Arendt at the New School for Social Research, has written the first in-depth biography of this foremost political philosopher. The book is both an adventure story that moves from pre-Nazi Germany to fame in the United States, and it is a study of the influences that shaped a sharp political awareness."--Richmond Times-Dispatch (on the earlier edition)
"Young-Bruehl has compiled a wealth of historical background and detail amassed from Arendt's correspondence and notes and from interviews with friends and family to show how her thought developed. Besides her treatment of Arendt's early career, of special interest is the author's discussion of the philosopher's warm friendships with Jaspers, Heidegger, Mary McCarthy, and other leading intellectuals. . . . Young-Bruehl's extensive research and careful analyses are well handled."--Booklist (on the earlier edition)
"This book is a tribute to Arendt. Her preferences, sympathies, and eccentricities are lovingly rolled together, accepted, and made to seem coherently justified. . . . The single best book on a contemporary political thinker."--Paul Roazen, Canadian Journal of Political Science (on the earlier edition)
"A clear, elegant, and revealing book."--Robin Morgan, Ms. (on earlier edition)
"An exemplary biography of one of the leading intellectual luminaries among the Jews from Germany who emigrated to this country in the wake of the Nazi rise to power. . . . Equally at home is discussing philosophical issues, offering psychological reflections, and simply recounting the life struggles of an immigrant and her community, the author has shared with us a portrait that will contribute greatly to our understanding of the century through which we have lived."--from the citation for the 1982 Kenneth B. Smilen Present Tense Award for the best book in Biography/Autobiography (on the earlier edition)
"Elisabeth Young-Bruehl's Hannah Arendt is to be commended for its impressive mastery of twentieth-century central European history and its keen perception of the way events and philosophical probings coalesced in this displaced intellectual. The intimate exploration of Arendt's life and friendships illuminates the importance of her contribution to twentieth-century American thought, both through her writings and through her strong personal presence."--YUP Governor's Award citation (on the earlier edition)
Winner of the 1983 Alfred Harcourt Prize Award for Biography and Memoirs
Nominated for the 1983 National Jewish Book Award in History
"Haunting and powerful, . . . [this book is an] exemplary adventure story engaging as well the life of the mind. . . . Young-Bruehl's accomplishment is of the highest order, and all of us who either knew Hannah Arendt of are acquainted with her writings owe an enormous debt to the author."--Norman Jacobson, University of California, Berkeley (on the earlier edition)

Elisabeth Young-Bruehl, who now practices as a psychoanalyst in New York City, is on the faculty of the Columbia Center for Psychoanalytic Training and Research.

1. Hannah Arendt: For Love of the World

2. Hannah Arendt: For Love of the World

3. Hannah Arendt: For Love of the World

4. Hannah Arendt: For Love of the World Young-Bruehl, Elisabeth