Items related to The Computer and the Brain (Lectures)

Neumann, Burton L. The Computer and the Brain (Lectures)

The Computer and the Brain (Lectures) 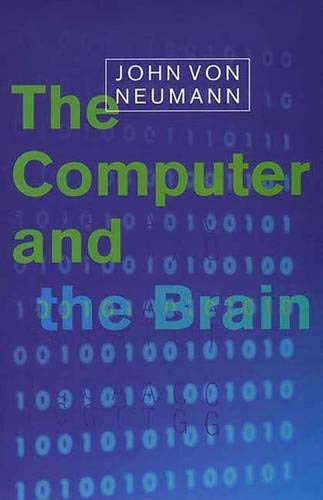 This book, composed of material prepared for the Silliman Lectures by john von Neumann before his death, represents the views of one of the greatest mathematicians of the twentieth century on the analogies between computing machines adn the living human brain. He concludes that the brain operates in part digitally, in part analogically, but uses a peculiar statistical language unlike that employed in the operation of man-made computers.

Whether they think it's impossible or inevitable, most people have highly polarised views on artificial intelligence. John von Neumann, genius, mathematician and inventor of the nearly ubiquitous computer architecture bearing his name, blazed trails for both camps in The Computer and the Brain.

This short book, originally written for Yale's Silliman lectures but published posthumously, summarises his views on machine and biological intelligence with unprecedented clarity and precision. His understanding of neuroscience was that of a brilliant and strongly motivated amateur at the end of the 1950s, good enough to take on the problem but by no means matching his comprehension of the machines to which he had devoted much of his professional life. Still, his take on intracranial computation is stunningly prescient--he looks beyond the then-fashionable digital metaphors to suggest a semi-analogue strategy that uses parallel processing to make up for its deficiency in speed.

Prominent neuroscientific thinkers Paul M. Churchland and Patricia S. Churchland provide a brief, enlightening foreword to the second edition, placing the author's thinking in context and grounding the reader in the scientific milieu that gave rise to The Computer and the Brain. Though his computer architecture is slowly growing obsolete, von Neumann has given us a more lasting legacy in his thinking about thinking. --Rob Lightner

1. The Computer and the Brain (The Silliman Memorial Lectures Series)

2. The Computer and the Brain (The Silliman Memorial Lectures Series)

3. The Computer and the Brain (The Silliman Memorial Lectures Series) von Neumann, John