Items related to The Golden Door: Letters to America

The Golden Door: Letters to America 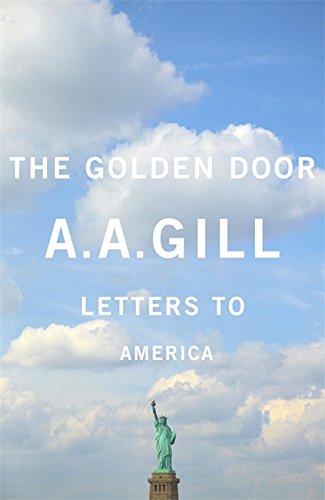 Where were you when John F. Kennedy was shot? Today the answer more often than not is going to be 'not born'. You have to be some way past 45 to know where you were when Kennedy was shot in Dallas in 1963. A generation later, you could ask the same question about the World Trade Centre. Where were you when the plane hit the twin towers on 11 September 2001? But this book is about what happened between those two moments. The world's perception of America changed between those two waves.

AA Gill's book is about the things he's always found admirable and optimistic about the United States and its citizens. Two of the happiest times of his life were spent living in New York and the mountains of Kentucky. The contrast between the two couldn't have been more complicated and different. The America he found was contradictory and elusive, not the simpletons' place he'd been led to believe. It was still a list of raw ingredients rather than the old stew of Europe.

Now AA Gill takes another look at the America he knew in the Seventies, a place that seemed to hold promise, practical energy and a plan for the future. How did it become the political magnetic north against which the liberal intellectuals from the rest of the world set their opinions. Why is it so easily mocked, so comprehensively blamed, so thoughtlessly hated?

The book is a collection of linked essays based around places that will open up truths and mythologies about America and Americans. The theme of his journey will be searching for 'the home of'. Every other small town in America boasts on its Welcome sign that it is the home of something or other. A mountain, a mine, peaches, spotted pigs, a president, the world's biggest ball of string, barbeques, the deepest hole. So that's where AA Gill starts, going to find the home of everything.

A.A. Gill sees things very differently, and in this collection of penetrating and abrasive essays he takes issue with any number of lazy cliches. (THE MAIL ON SUNDAY)

This immensely entertaining collection of pieces inspired by Gill's love and knowledge of America provides a welcome reminder of his gift for sharp, clever and vigorous prose. In all of them, he shows his skill in fusing cultural and historical knowledge, personal anecdotes and trenchant opinions. (THE SUNDAY TIMES)

Britain's most readable columnist takes on his biggest challenge - America.

1. The Golden Door: Letters to America

Book Description Paperback. Condition: Very Good. The book has been read, but is in excellent condition. Pages are intact and not marred by notes or highlighting. The spine remains undamaged. Seller Inventory # GOR005488056

2. The Golden Door: Letters to America

Book Description Paperback. Condition: Good. The book has been read but remains in clean condition. All pages are intact and the cover is intact. Some minor wear to the spine. Seller Inventory # GOR005902624

3. The Golden Door: Letters to America

Book Description Condition: Good. The item shows wear from consistent use, but it remains in good condition and works perfectly. All pages and cover are intact (including the dust cover, if applicable). Spine may show signs of wear. Pages may include limited notes and highlighting. May NOT include discs, access code or other supplemental materials. Seller Inventory # 31UI56005843_ns

4. The Golden Door: Letters to America

Book Description WandN, 2012. Paperback. Condition: Used; Good. **Simply Brit** Shipped with Premium postal service within 24 hours from the UK with impressive delivery time. We have dispatched from our book depository; items of good condition to over ten million satisfied customers worldwide. We are committed to providing you with reliable and efficient service at all times. Seller Inventory # 1526872