Items related to The Man Who Wrote Mozart

The Man Who Wrote Mozart 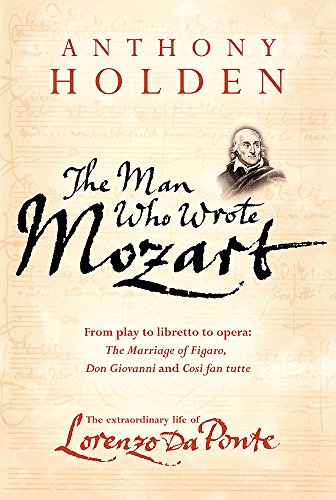 In June 1805, a 56-year-old Italian immigrant disembarked in Philadelphia carrying only a violin. Before dying in New York 23 years later, in his ninetieth year, he would find New World respectability as a bookseller, then as the first Professor of Italian at Columbia University. For now, he set up shop as a grocer. There was always an air of mystery about the Abbe Lorenzo da Ponte. A scholarly poet, teacher and priest, with a devoted wife, he also had a reputation as a womanizer. Da Ponte charmed all he met, pioneering the place of Italian music in American life. But his self-assurance also excited mistrust. When the first Italian opera was performed in New York in 1825, he had the nerve to claim he had written it. He had, so he said, known Mozart. Not to mention Casanova. Like the memoirs he had recently written, to pay off more debts, the old man was so full of tall stories... The many lives of Lorenzo da Ponte - librettist of Mozart's three great operas, The Marriage of Figaro, Don Giovanni and Cosi Fan Tutte - begin in Venice, linger in Vienna and London and wind up in New York, where today he lies buried in an unmarked grave in the world's largest cemetery. Anthony Holden's marvellous biography does justice at last to Mozart's collaborator.

"the writer who evokes Mozart's world most vividly - albeit obliquely - is the journalist and music critic Anthony Holden... Da Ponte's life ... is certainly a rollicking yarn... a riproaring read." (HUGH CANNING SUNDAY TIMES)

"Holden's narrative verve spans continents and centuries. His life of Da Ponte is engrossing and bound to be definitive. It is a brilliant story." (OBSERVER)

"Anthony Holden steers through this incredible picaresque story with elan, well paced gusto and a gentle, if not uncritical, eye... Anthony Holden's book is a fine achievement." (THE OLDIE)

"It is hard to imagine a more flamboyant personal history, a gift to the biographer Anthony Holden, who relishes his subject's sheer exuberance." (GUARDIAN)

"Anthony Holden's compelling narrative does justice to the man and to the highs and lows of his unusually varied career." (WATERSTONE'S BOOKS QUARTERLY)

"he writes with a sincere enthusiasm about the creative partnership with Mozart." (JONATHAN KEATES SUNDAY TELEGRAPH)

1. The Man Who Wrote Mozart: The Extraordinary Life of Lorenzo Da Ponte