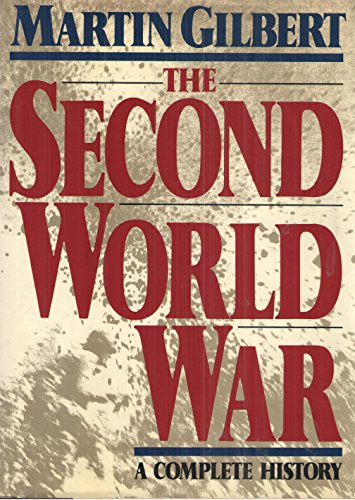 Originally published by Weidenfeld in 1989 and now available in paperback, a history of the Second World War, which looks at its political, diplomatic, military and civilian aspects.

"Surprisingly effective in reminding us that World War II was more than a series of battles and feats of arms."

Amanda Foreman explains why this is one of her favourites...
There are so many good books on World War II, but Gilbert’s stands out for two reasons.

First, as Winston Churchill’s biographer, Gilbert is the only historian in the world to have had complete access to all his papers. This gives a depth and insight into the War from Britain’s perspective that many other books lack.

But perhaps more importantly, Second World War has a profound humanity. Unlike most war historians, Gilbert is also a specialist in the holocaust, and he put his intimate knowledge of individual case histories to use while writing the book. While describing the German onslaught through town and countryside, Gilbert is also able to highlight the fate of individuals – a twelve-year-old boy named Laslo taken out and shot, the Goldschmid family obliterated.

It is Gilbert’s broad vision that makes this book a classic.