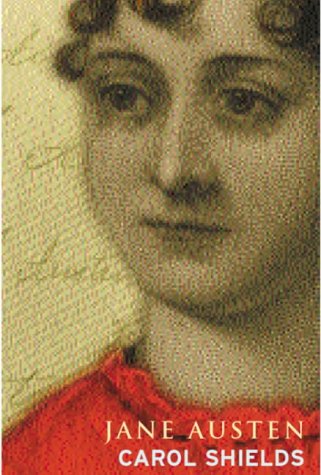 In this charming book, the prizewinning novelist Carol Shields, whose novels have themselves been compared to the works of Jane Austen, gives us a beautifully written, perceptive look at the life of one of the finest and most popular English novelists of all time. Jane Austen was born in 1775 in the remote Hampshire village of Steventon. Her parents, George Austen, Rector of Steventon, and his wife, Cassandra Leigh Austen, belonged to what was then called the lesser gentry. They were never financially secure but their education and family connections meant they were not at a disadvantage when set beside their wealthier neighbours. Jane Austen spent the first 25 years of her life in Steventon and the last eight in nearby Chawton, and did most of her writing in these two places. She never married although many of her novels are about marriage, and always lived with her parents and sister Cassandra. Whilst not unaware of the larger political and social goings-on at the time, she chose a small canvas for her novels, preferring to focus on the family as a microcosm through which to explore human nature. Sir Walter Scott praised the delicate observation and fine judgement in her novels, which she herself characterised as ¿the little bit (two inches wide) of ivory on which I work with so fine a brush, as produces little effect after much labour¿. She died in 1817 at the age of 42, having just begun to find fame as a novelist.
Jane Austen¿s life remains fairly opaque: she kept no diary that we know of, there is no voice recording such as we possess for Virginia Woolf and no photograph as there is of George Eliot. 160 Austen letters survive but none written earlier than her 20th year. In spite of this Carol Shields has written a wonderfully observant biography of this remarkable writer whose characters are as alive today in their longings as they were two hundred years ago, when Austen first gave them breath.

It is a source of perennial frustration to Jane Austen's admirers that so little is known about her quiet existence as an unmarried woman with no outlet for her ferocious intelligence in genteel, rural England at the turn of the 19th century. Carol Shields, who won a Pulitzer Prize in 1995 for The Stone Diaries, has already proved herself a writer who can convey large truths with an economical amount of material, which makes her an excellent choice as Austen's biographer. Shields' brief but cogent text makes persuasive connections between Austen's novels and her life (the plethora of unsatisfactory mothers, for example, and the obvious sympathy for women barred from marriage by poverty and from careers by social custom), but she never forgets that fiction expresses first and foremost an artist's response to the world around her, not actual personal history. In fact, Shields argues, it may well have been Austen's sense that the novels she loved to read didn't provide a very accurate picture of the society she knew that fired her own work. Her merciless portraits of the economic underpinnings of marriage and family relations are in many ways more "realistic" than male writers' dramas of battle or females' fantasies of romantic bliss. As for her life's lack of incident, its one major disruption, her parents' move to Bath, prompted a nine-year silence from their formerly prolific daughter. Shields gleans as much as she can from Austen's letters, while remembering that they too gave voice to a persona not the whole truth, to delineate a quirky, sometimes cranky, sometimes catty woman who was by no means the perfect maiden aunt her surviving relatives sought to immortalise. An Austen biography will never be as much fun as an Austen novel, but Shields does a remarkably entertaining job of discerning the links between the two. --Wendy Smith

Not much is really known about the life of Jane Austen. But that, of course, has not prevented big 'lives' of her being written. The latest and probably best (by David Nokes) weighed in at more than 500 pages. Nokes is an academic, Carol Shields a novelist - and her 200-page biography does not claim to come up with original research. Instead it combines a survey of the life with some more than incidental reflections on the art of the novel and is a very readable introduction to the work of the woman who actually had to pay to get Sense and Sensibility published! Perhaps Shields is a little simplistic in describing her work as "not a piece of reportage from the society of a particular past, but a wise and compelling exploration of human nature", for the question of her context is more complex than that. And a little eccentric when noticing that toes (yes, toes) are not mentioned in her novels. But this is a useful and refreshing book.