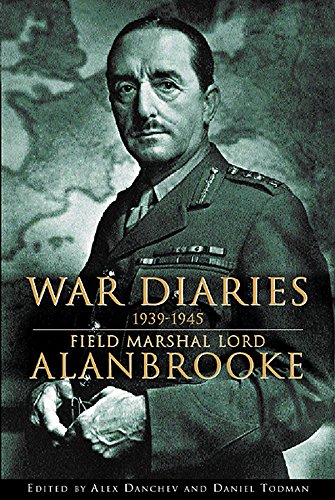 Alanbrooke was CIGS - Chief of the Imperial General Staff - for the greater part of the Second World War. He acted as mentor to Montgomery and military adviser to Churchill, with whom he clashed. As chairman of the Chiefs of Staff committee he also led for the British side in the bargaining and the brokering of the Grand Alliance, notably during the great conferences with Roosevelt and Stalin and their retinue at Casablanca,Teheran, Malta and elsewhere. As CIGS Alanbrooke was indispensable to the British and the Allied war effort.

The diaries were sanitised by Arthur Bryant for his two books he wrote with Alanbrooke. Unexpurgated, says Danchev, they are explosive. The American generals, in particular, come in for attack. Danchev proposes to centre his edition on the Second World War. Pre and post-war entries are to be reduced to a Prologue and Epilogue). John Keegan says they are the military equivalent of the Colville Diaries (Churchill's private secretary), THE FRINGES OF POWER. These sold 24,000 in hardback at Hodder in 1985.

Already celebrated as the most important war diaries yet to appear, Field Marshal Lord Alanbrooke's War Diaries 1939-1945, edited by Alex Danchev and Dan Todman, are full of fascinating and controversial stuff. But Alanbrooke's style should not be confused with that of Alan Clark: he does not set out to be controversial for controversy's own sake and there is little gossip or speculation. The tone is steady and soldierly throughout, which only makes it more impressive and, at times, curiously moving. It is the voice of a man of great self-control and military expertise, weighed down with the tremendous burdens of conducting a global war. The central relationship is inevitably with Winston Churchill, whose cavalier attitudes and short-term enthusiasms for hare-brained schemes that would cost many lives, often infuriated Alanbrooke. And, in private at least, on the pages of his diary, he would say so: Churchill "knows no details, talks absurdities" and is "a public menace". You can see Alanbrooke's point, when he records that Churchill has suggested making aircraft carriers out of ice. But above all, with Alanbrooke, you get balance. He never pretends that Churchill was anything but a genius, as a war leader:

genius mixed with an astonishing lack of vision--he is quite the most difficult man to work with that I have ever struck but I should not have missed the chance of working with him for anything on earth!

It is also interesting to find how poor relations were between Britain and America at the time, with even Churchill, part-American himself, inveighing against the "evils of Americans". The overwhelming feeling arising from these diaries is that, contrary to what we now think of as the inevitable, historic triumph of the Allies, it was in fact, as Wellington said after Waterloo, "a close run thing, a damn close run thing". The diaries are superbly edited, cut short with fine judgement on the last day of August 1945, with the quiet entry, "I had Paget to lunch, he was in excellent form. In the evening I motored home". All in all, this is a good job well done. --Christopher Hart Book Description:

The first complete and unexpurgated edition of the war diaries of Field Marshall Lord Alanbrooke - the most important and the most controversial military diaries of the modern era.