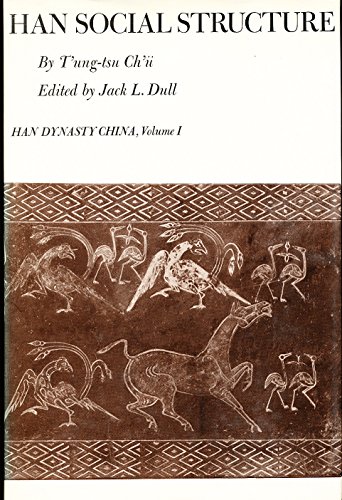 This comprehensive analysis of the social structure of a major Chinese dynasty will be of great value to historians, anthropologist, and sociologist. A study of Han social structure is of particular importance because during the Han dynasty the complex heritage of ancient China was remolded and the foundations were laid for a stable, continuing system for state and society. The author investigates the whole range of Han society. He traces the powerful role developed by consort families and the rising status of the official, particularly of the scholar. he discusses 'guests' (or retainers), showing how their position in Chinese society slowly declined, and describes various aspects of the institution of slavery. According to Ch'u, a ruling bureaucracy formed the core of the social power structure in imperial China. This stratum interlocked with and was supplemented by "powerful families." "The Chi'in-Han material on powerful families assembled in this book is among the richest of its kind, and although different interpretations can be expected, all serious students will agree that Ch'u's contribution has raised the investigation of Chinese society and history to a new level of factual inquiry and coordination," Karl A. Wittfogel writes in the Foreword. The first part of the study contains discussions on kinship, marriage, the position of women, social classes, and power families. The second includes carefully annotated translations of passages from the Shih-chi, Han-shu, and Hou Han-shu. These documents not only provide the evidence for the author's argument, but also, by making such primary material available in English for the first time, will serve other researchers on a vast array of topics relating to all phases of Han history. This volume initiates a series of monographic studies on various aspects in the Han period as they have been researched by members of the Han Dynasty History Project and the University of Washington.