Items related to Fear on Trial 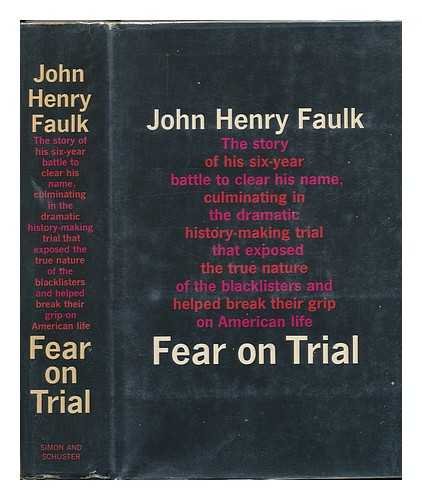 John Henry Faulk was a popular radio and television personality during the McCarthy era. He was host of his own radio program on WCBS in New York when he publicly challenged AWARE, Inc., an ultrapatriotic group engaged in the systematic blacklisting of entertainment personalities. In response, an AWARE bulletin accused Faulk himself of subversive associations. Angry and frightened by this accusation, Faulk brought suit against AWARE, charging conspiracy to libel him and to destroy his career. Thus began one of the great civil rights cases of this century. John Henry Faulk recounts the story of this harrowing time in Fear on Trial, the dramatic account of his six years on the "blacklist"-an exile that began with the AWARE bulletin and ended with his vindication by a jury award of $3,500,000-the largest libel award in U.S. history at that time. The heart of the book is the trial of Faulk's libel action against AWARE, in which attorney Louis Nizer relentlessly exposed the blacklist for what it was-a cynical disdain of elementary decency couched in the rhetoric of patriotism. Many of the people involved in the Faulk case were and are famous: attorneys Nizer and Roy Cohn; Edward R. Murrow and Charles Collingwood; Myrna Loy, Kim Hunter, Tony Randall, and Lee Grant; J. Frank Dobie; Ed Sullivan, David Susskind, and Mark Goodson. But the hero is Faulk himself, a man who-in the words of Studs Terkel-"faced the bastards and beat them down."

"... a vivid remembrance of things not too far past, almost unbelievable things that . . . may not really be past at all." * Newsweek *

Book Description Hardcover. Condition: Acceptable. This item is fairly worn, but continues to work perfectly. Signs of wear can include aesthetic issues such as scratches, dents, worn corners, bends, tears, small stains, and partial water damage. All pages and the cover are intact, but the dust cover may be missing, if applicable. Pages may include excessive notes and highlighting, but the text is not obscured or unreadable. Satisfaction Guaranteed. Seller Inventory # 4BQGBJ00A85B_ns

Book Description Hardcover. Condition: N-Fine. Dust Jacket Condition: N-Fine. Ed Lindlof (illustrator). First Edition/First Printing. A square solid tight clean un-read un-opened copy. This copy has some foxing to the top edge of the text block and some very light soil to the front board. The jacket has some very minor edge wear, some very light soil. Foreword by Studs Terkle. This edition, a re-issue of the book originally published in 1964 has been revised and up-dated with editorial assistance from Don Gardner. The book is centered on the trial which resulted in a 3.5 million dollar judgement against AWARE which was a group that was blacklisting entertainment personalities for their alleged subversive activities. This copy has a full page inscription to Richard Jones from Faulk and has been signed by him. Signed by Author(s). Book. Seller Inventory # 020462