Items related to Sands of Mars 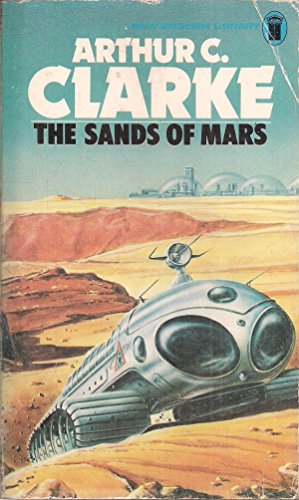 SCIENCE FICTION-ON MARS A DEDICATED GROUP OF PIONEERS-AMONG THEM SOME OF EARTHS FINEST BRAINS-STUGGLE TO CHANGE THE FACE OF THE PLANET.

Arthur C. Clarke was born in Minehead in 1917. During the Second World War he served as an RAF radar instructor, rising to the rank of Flight-Lieutenant. After the war he won a BSc in physics and mathematics with first class honours from King's College, London. One of the most respected of all science-fiction writers, he also won the KALINGA PRIZE, the AVIATION SPACE-WRITERS PRIZE,and the WESTINGHOUSE SCIENCE WRITING PRIZE. He also shared an OSCAR nomination with Stanley Kubrick for the screenplay of 2001: A SPACE ODYSSEY, which was based on his story, 'The Sentinel'. He lived in Sri Lanka from 1956 until his death in 2008. To discover more about how the legacy of Sir Arthur is being honoured today, please visit http://www.clarkefoundation.org

Book Description Sidgwick & Jackson Ltd, 1976. Condition: Fair. This is an ex-library book and may have the usual library/used-book markings inside.This book has soft covers. With usual stamps and markings, In fair condition, suitable as a study copy. Seller Inventory # 6278197

Book Description Paperback. Condition: Fair. A readable copy of the book which may include some defects such as highlighting and notes. Cover and pages may be creased and show discolouration. Seller Inventory # GOR005702889

Book Description Paperback. Condition: Good. The book has been read but remains in clean condition. All pages are intact and the cover is intact. Some minor wear to the spine. Seller Inventory # GOR007057028

Book Description Paperback. Condition: Very Good. The book has been read, but is in excellent condition. Pages are intact and not marred by notes or highlighting. The spine remains undamaged. Seller Inventory # GOR005737199

6. The Sands Of Mars

7. The Sands Of Mars

Book Description Sidgwick & Jackson / New English Library / NEL, 1976. Paperback: 7" x 4Ľ". Condition: Good: Moderate signs of wear. Cover Art: Gordon C Davies (illustrator). 1976 Edition. © 1951: A stand-alone novel by Arthur C Clarke. 2nd printing of 1976 edition:- Synopsis: It is the twenty-first century. On Mars a dedicated group of pioneers - among them some of Earth's finest brains - struggle to change the face of the planet. The Mars of this novel has no fabulous cities or exotic princesses; it is the planet which modern science has revealed to us, and the book's authenticity provides a far greater excitement than would fantasy. Against this background, Arthur C Clarke has woven a thrilling story about a group of very real people, to show that amidst the wonder of future science, human nature will stay very much the same. A startling, prophetic novel by the author of '2001: A Space Odyssey':- (original cost Ł0.75). Seller Inventory # 17.012.00036

Book Description Sidgwick & Jackson Ltd, 1976. Condition: Good. New edition. Ships from the UK. Shows some signs of wear, and may have some markings on the inside. Seller Inventory # GRP94915222

9. THE SANDS OF MARS