Items related to The Coal of El Cerrejon: Dependent Bargaining and Colombian... 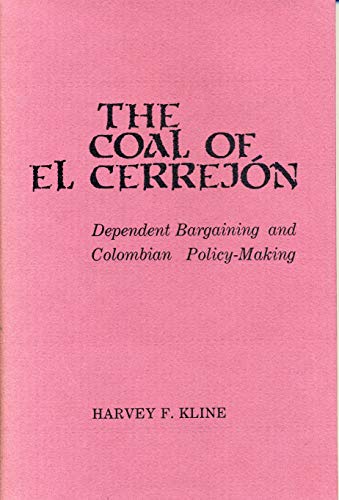 In September 1980 the Colombian government made an agreement with an Exxon subsidiary for the development of the coal of the northern section of the El Cerrejon region, thus entering into one of the largest joint ventures with a transnational enterprise in the history of Latin America. In May 1981 the government awarded coal-development rights in central El Cerrejon to a Spanish-Colombian consortium. This book is an analysis of the decisions that led to the two contracts and of the bargaining of an oil-importing developing country with transnational enterprises (TNEs) over a previously unexploited resource during the energy crisis.Combining the literature on dependencia and that on bargaining between developing countries and TNE's, this book advances a "dependent bargaining" hypothesis. It finds that there was a continuum of Colombian policy makers, from the "Nationalist" who favored energy development with no TNE involvement, to the "Reactionary" who was willing to agree to any energy development proposed by the foreign companies. Between those two extremes were numerous varieties of dependent bargainers who accepted the constraints of dependency and TNE participation in energy contracts as givens, but who used their political and technical abilities to obtain what they perceived as the best deal available to the country.After a general introduction, the book investigates the Colombian context for policy making, presenting the patterns that had developed by 1970. It then considers the El Cerrejon decisions made between 1970 and 1981, giving historical detail and analyzing the evolution of dependent bargaining over time. Finally, it presents conclusions dealing with the variety of dependent bargainers and offering an explanation of the variation; a comparison of the El Cerrejon cases with similar decisions in other developing countries; and the prospects for future Colombian bargaining, in the light of the El Cerrejon decisions. The Coal of El Cerrejon shows that matters such as coal development in Third World countries are not completely determined by international forces, but rather that much of the credit for beneficial contracts--and the blame for prejudicial ones--rightly is deserved by the political elites of the countries.

Harvey F. Kline is Professor and Chairman of the Department of Political Science at The University of Alabama. He has lived in Columbia on three separate occasions, for a total of about four years, and has written extensively on Colombian And Latin American politics.

Book Description Pennsylvania State University Press, 1990. Condition: Good. Former Library book. Shows some signs of wear, and may have some markings on the inside. Seller Inventory # 367547-6

Book Description Pennsylvania State University Press, 1990. Condition: Good. Shows some signs of wear, and may have some markings on the inside. Seller Inventory # 367546-6

3. The Coal of El Cerrejon: Dependent Bargaining and Colombian Policy-Making