Items related to Syria Publications of the Princeton University Archaeologica... 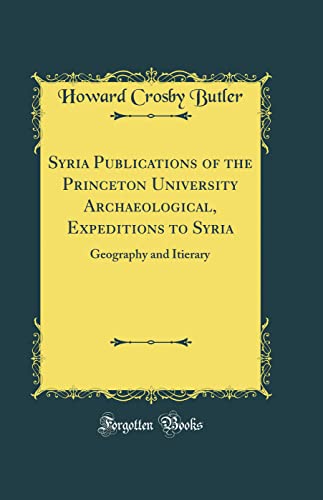 Excerpt from Syria Publications of the Princeton University Archaeological, Expeditions to Syria: Geography and Itierary

The instruments used were a prismatic compass, a twelve-inch theodolite with solar attachment, three specially selected Waltham watches, an aneroid barometer, and a boiling-point thermometer. The plan adopted in general was to keep a compass dead reckoning, assuming the pace to be an average of two and three-quarters miles per hour for ordinary going, and three miles per hour on good roads. For more accurate determination of locations the theodolite was used. Whenever there was a sufficient elevation the theodolite was set up and oriented by the magnetic needle, and sights were taken to prominent objects such as hills, towns, and ruins. From the natives also the approximate distances to these places were obtained, generally in hours of travel on foot; but these estimates of distance were rarely accurate. It was possible, however, to intersect a good many of these points from the next observation site.

1. Syria Publications of the Princeton University Archaeological, Expeditions to Syria

2. Syria Publications of the Princeton University Archaeological, Expeditions to Syria