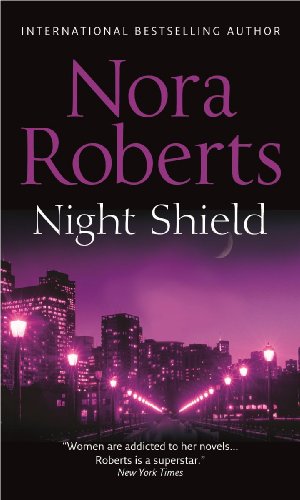 'Try to sleep at night.' A series of well-organised burglaries has Detective Allison Fletcher going undercover as a waitress in a high-class bar. It's not long before one of the wealthy customers is robbed, and Allison discovers how the con is being worked. Allison foils one of the burglaries and a gun is turned on her. She has no choice but to shoot the woman holding the weapon. The robber's psychotic, controlling brother knows who killed his beloved sister, and now he's out for revenge. When he breaks into Allison's flat, leaving blood-stained words on the walls, Allison knows she's in terrible danger. And her cop's shield won't be enough to protect her from a madman...

"Women are addicted to her novels...Roberts is a superstar." - New York Times "Roberts's bestselling novels are some of the best in the romance genre.'" - USA TODAY"

NORA ROBERTS No.1 New York Times bestselling author Nora Roberts is "a word artist, painting her story and characters with vitality and verve," according to the Los Angeles Daily News. She has published over a hundred novels, and her work has been optioned and made into films, excerpted in Good Housekeeping, and has been translated into over twenty-five different languages and published all over the world. With over 400 million copies of her books in print worldwide, she is truly a publishing phenomenon.

Book Description Silhouette Books, 2009. Condition: Good. Ships from the UK. Former Library book. Shows some signs of wear, and may have some markings on the inside. Seller Inventory # 18744043-20

Book Description Silhouette Books, 2009. Condition: Good. Ships from the UK. Shows some signs of wear, and may have some markings on the inside. Seller Inventory # 6282792-6

Book Description Silhouette Books, 2009. Condition: Good. A+ Customer service! Satisfaction Guaranteed! Book is in Used-Good condition. Pages and cover are clean and intact. Used items may not include supplementary materials such as CDs or access codes. May show signs of minor shelf wear and contain limited notes and highlighting. Seller Inventory # 0263877248-2-4

Book Description M & B, 2010. Paperback. Condition: Good. Good condition is defined as: a copy that has been read but remains in clean condition. All of the pages are intact and the cover is intact and the spine may show signs of wear. The book may have minor markings which are not specifically mentioned. Most items will be dispatched the same or the next working day. Seller Inventory # wbb0016621146

Book Description M and B, 2010. Paperback. Condition: Used; Good. **Simply Brit** Shipped with Premium postal service within 24 hours from the UK with impressive delivery time. We have dispatched from our book depository; items of good condition to over ten million satisfied customers worldwide. We are committed to providing you with reliable and efficient service at all times. Seller Inventory # mon0001563811

Book Description M and B, 2010. Paperback. Condition: Used; Good. Wear and Tear to cover **SHIPPED FROM UK** We believe you will be completely satisfied with our quick and reliable service. All orders are dispatched as swiftly as possible! Buy with confidence!. Seller Inventory # 3760880

Book Description Silhouette Books, 2009. Paperback. Condition: Good. The book has been read but remains in clean condition. All pages are intact and the cover is intact. Some minor wear to the spine. Seller Inventory # GOR001599198