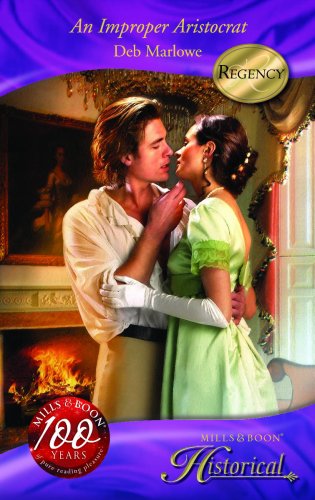 All accusations that the Earl of Treyford acknowledges with pride. The scandalous son of a disgraced mother, he has no time for the pretty niceties of the ton, nor the simpering debutantes who populate its ballrooms. He has returned to England to aid an "aging" spinster facing an undefined danger.

But Miss Latimer's dark and sultry beauty, her fascinating mix of knowledge and innocence, arouse far more than his protective instincts. Can such an improper aristocrat learn to be the true gentleman Miss Latimer deserves?

Deb Marlowe grew up with her nose in a book. Luckily, she’d read enough romances to recognize the hero she met at a college Halloween party – even though he wore a tuxedo t-shirt instead of breeches and boots! They married, settled in North Carolina. Though she spends much of her time at her laptop, for the sake of her family, Deb does occasionally abandon her inner world for the adventures of laundry, dinner and carpool. You can contact Deb at: deb@debmarlowe.com