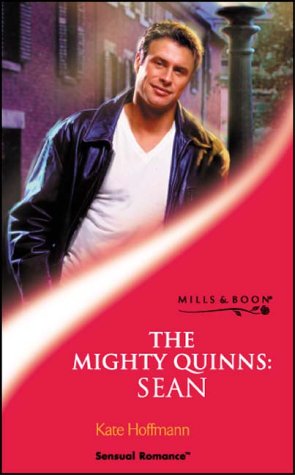 The only thing that can bring down a Quinn is a woman...The next Mighty Quinn...P.I. Sean Quinn lives by one rule--never get involved. And he's always held to it...until his latest case, where he nabbed a polygamist just before the guy led another poor woman astray. His mistake? Agreeing to break the bad news to the man's fiancee. Because that woman is already at the church, expecting to become a bride. And she's just asked Sean to be her groom...His downfall...If Laurel Rand can't prove to her uncle that she's married, he'll leave his entire fortune to a bunch of coin collectors. But before long, convincing her uncle is the least of Laurel's problems. Confined with Sean in close quarters, trying in vain to ignore the overwhelming chemistry between them, Laurel sees just what great "husband" material Sean is. And she's determined to make him see it, too. Luckily, the deal they made covers the honeymoon stage...

Kate Hoffmann has written over 70 books for Harlequin, most of them for the Temptation and the Blaze lines. She spent time as a music teacher, a retail assistant buyer, and an advertising exec before she settled into a career as a full-time writer. She continues to pursue her interests in music, theatre and musical theatre, working with local schools in various productions. She lives in southeastern Wisconsin with her cat Chloe.

Book Description Mills and Boon, 2004. Mass Market Paperback. Condition: Used; Good. Dispatched, from the UK, within 48 hours of ordering. This book is in good condition but will show signs of previous ownership. Please expect some creasing to the spine and/or minor damage to the cover. Aged book. Tanned pages and age spots, however, this will not interfere with reading. Seller Inventory # CHL6149585

Book Description Mills and Boon, 2004. Mass Market Paperback. Condition: Used; Good. Dispatched, from the UK, within 48 hours of ordering. This book is in good condition but will show signs of previous ownership. Please expect some creasing to the spine and/or minor damage to the cover. Seller Inventory # CHL6505562

Book Description Mills & Boon 05/03/2004, 2004. Mass Market Paperback. Condition: Very Good. Shipped within 24 hours from our UK warehouse. Clean, undamaged book with no damage to pages and minimal wear to the cover. Spine still tight, in very good condition. Remember if you are not happy, you are covered by our 100% money back guarantee. Seller Inventory # 6545-9780263840018

Book Description -, 2004. Mass Market Paperback. Condition: Very Good. The Mighty Quinns: Sean (Sensual Romance) This book is in very good condition and will be shipped within 24 hours of ordering. The cover may have some limited signs of wear but the pages are clean, intact and the spine remains undamaged. This book has clearly been well maintained and looked after thus far. Money back guarantee if you are not satisfied. See all our books here, order more than 1 book and get discounted shipping. Seller Inventory # 7719-9780263840018

Book Description Mills & Boon, 2004. Paperback. Condition: Very Good. The book has been read, but is in excellent condition. Pages are intact and not marred by notes or highlighting. The spine remains undamaged. Seller Inventory # GOR001382266