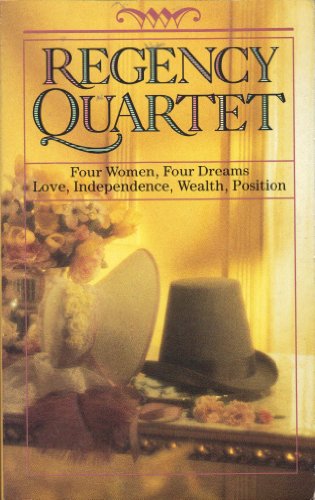 Wealthy cit's daughter Harriet Ogbrook found the only way to survive school was to dream of confounding everyone by marrying an earl. Astonishingly, Max, Earl of Trevereux, courted her, beautifully, but his reason for marriage broke Harriet's heart-now could she bear it?

Craving love, Miss Lucinda Winterton allowed herself to be persuaded to elope by Bernardo Arrezzo, only to discover that fleeing into the night could be farcical. Lucinda was sure of one thing-she didn't want to be rescued by Sir Gareth Chalfont!

Only her naive honesty prevented Elfreda Pride from appearing to be a fortune hunter, for, very practically, she knew that to restore Pride House she would need to marry money. Stephen Jeffreys seemed to fit the bill, agreeing to a businesslike marriage, much to her relief-until the honeymoon...

Miss Athena Delaney knew the unsteady life generated by her father's gambling had to stop, and despite the response of the ton, she was determined to earn her own living. But Lord Nick Verlaine found Athena's apparent unattainability a challenge, one he couldn't resist!

Book Description Mills and Boon, 1992. Paperback. Condition: Used; Good. **Simply Brit** Shipped with Premium postal service within 24 hours from the UK with impressive delivery time. We have dispatched from our book depository; items of good condition to over ten million satisfied customers worldwide. We are committed to providing you with reliable and efficient service at all times. Seller Inventory # 1264114

Book Description -. Paperback. Condition: Very Good. Regency Quartet This book is in very good condition and will be shipped within 24 hours of ordering. The cover may have some limited signs of wear but the pages are clean, intact and the spine remains undamaged. This book has clearly been well maintained and looked after thus far. Money back guarantee if you are not satisfied. See all our books here, order more than 1 book and get discounted shipping. Seller Inventory # 7719-9780263777208