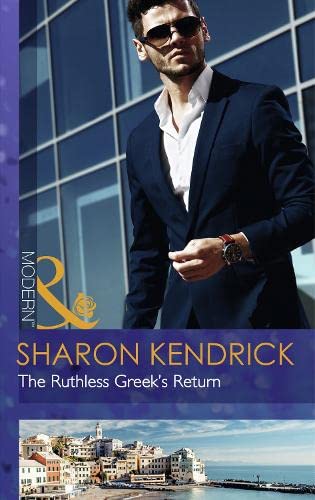 The jewel in his plan

Once Loukas Sarantos was bodyguard to the world’s richest men. Now the ruthless Greek is a CEO, with bodyguards of his own. And his most recent procurement means he can finally take revenge on Jessica Cartwright―the only woman ever to walk away from him.

As the face of Loukas’s new luxury jewellery company, formerly out-of-his-league Jessica now has to answer to him―and he will relish every second of having her under his control! But as the embers of their former fire reignite Loukas begins to realise that Jessica might be the most precious jewel in his possession...

Christmas in Da Conti’s Bed 4.5* RT Book Review
Kendrick’s romance is a war of wills between her charismatic hero and infamous, insecure heroine. Set in the lavish laps of New York and London, her mesmerizing narrative epitomizes raw powerful emotions.

The Housekeeper’s Awakening 4* RT Book Review
Kendrick writes an exciting romance. The European luxury adds relevance, the banter between the stars enlivens and the lovemaking sizzles.

Sharon Kendrick started story-telling at the age of eleven and has never stopped. She likes to write fast-paced, feel-good romances with heroes who are so sexy they’ll make your toes curl! She lives in the beautiful city of Winchester – where she can see the cathedral from her window (when standing on tip-toe!). She has two children, Celia and Patrick and her passions include music, books, cooking and eating – and drifting into daydreams while working out new plots.

Book Description Mills and Boon, 2015. Paperback. Condition: Used; Acceptable. Dispatched, from the UK, within 48 hours of ordering. The book is perfectly readable and fit for use, although it shows signs of previous ownership. The spine is likely creased and the cover scuffed or slightly torn. Textbooks will typically have an amount of underlining and/or highlighting, as well as notes. If this book is over 5 years old, then please expect the pages to be yellowing or to have age spots. Aged book. Tanned pages and age spots, however, this will not interfere with reading. Damaged cover. The cover of is slightly damaged for instance a torn or bent corner. Seller Inventory # CHL6491004

Book Description Mills & Boon. Condition: Good. Large type / large print edition. Ships from the UK. Former Library book. Shows some signs of wear, and may have some markings on the inside. Seller Inventory # GRP102230201

Book Description Mills & Boon, 2015. Paperback. Condition: Good. Ex-Library Book. Has usual library markings and stamps inside. All orders are dispatched the following working day from our UK warehouse. Established in 2004, we have over 500,000 books in stock. No quibble refund if not completely satisfied. Seller Inventory # mon0005544989

Book Description Mills and Boon, 2015. Paperback. Condition: Used; Good. **Simply Brit** Shipped with Premium postal service within 24 hours from the UK with impressive delivery time. We have dispatched from our book depository; items of good condition to over ten million satisfied customers worldwide. We are committed to providing you with reliable and efficient service at all times. Seller Inventory # 1745968

Book Description Mills and Boon, 2015. Paperback. Condition: Used; Good. **SHIPPED FROM UK** We believe you will be completely satisfied with our quick and reliable service. All orders are dispatched as swiftly as possible! Buy with confidence!. Seller Inventory # 2002111