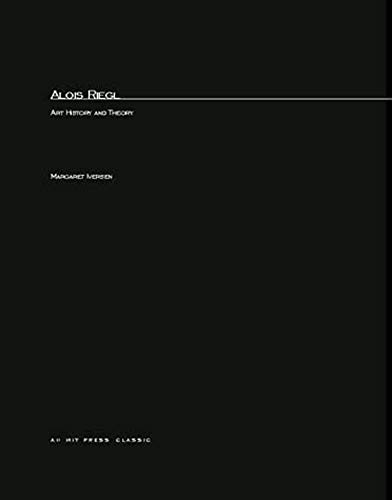 Alois Riegl (1858-1905) was one of the founders of art history as a discipline. This is the first general introduction to the work of the celebrated Austrian who brought complex philosophical considerations to bear on art and its history. Ranging easily over diverse fields and among a large group of thinkers, Margaret Iversen establishes Riegl's relevance to recent critical thinking while clearly delineating his extraordinary critical powers. Iversen contextualizes Riegl's thought among the wider cultural crosscurrents of his time, pointing for example to his denunciation of the sub-Semperians and his profound influence on Walter Benjamin. She is equally concerned to relate Riegl's work to contemporary theoretical interests, arguing that he pioneered an approach to art history that took into consideration the role of the spectator. She devotes a chapter to Riegl's theory of spectator/depiction relationships, comparing it with more recent writing on the subject by commentators like Fried, Foucault, and others. In a sympathetic reading of Riegl, Iversen interprets his theory of Kunstwollen or artistic volition, as a concept that ran counter to narrowly empiricist and determinist histories of art that were dominant in his time. She provides extended critical commentary on his most important works, Questions of Style, Late Roman Art Industry, and The Dutch Group Portrait, enriched by explorations of the theoretical background of his systematic art history, including the work of Kant, Hegel, Herbart, and Hildebrand. Iversen also details Erwin Panofsky's early response to Riegl, arguing that Panofsky's search for an authoritative viewpoint collapsed Riegl's multiple typology of style into an art history constructed around a single aesthetic norm.