Items related to Theory and Politics: Studies in the Development of...

Theory and Politics: Studies in the Development of Critical Theory (Studies in Contemporary German Social Thought) 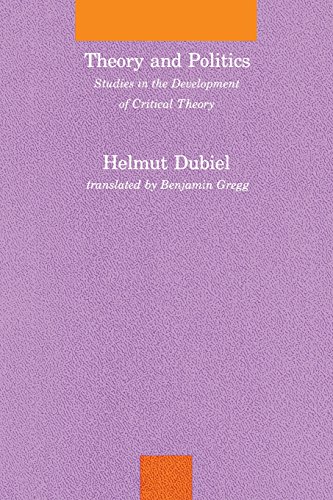 This important study of the relationship between historical developments and the work of the scholars associated with the Frankfurt Institute for Social Research yields fascinating insights into the actual workings of the Institute and the relationships among its members. The book has already had a major impact in Germany, where it has opened up the subject for argument and analysis by a new generation of scholars. Theory and Politics first explores the effect of political experience on the process of theory construction from 1930 to 1945. The central figure in this examination is Max Horkheimer, whose work is seen as the key to the shift in the Frankfurt School's focus from materialism to Critical Theory to a "critique of instrumental reason." Within each of the three periods defined by these foci the author examines external historical-political events (including the School's emigration to America) and their reflection in the group's changing conception of the relation of theory to practice as well as in its detailed theoretical position. Along the way he helps to clarify such questions as the School's evolving attitudes toward the Soviet Union, fascism, science, and the desired utopia. The book then examines what may have been the strongest stage of Critical Theory - the program for interdisciplinary research that emerged in the early 1930s. The author acutely portrays Horkheimer's conception of a synthesis between philosophy and empirical social science that would result in a form of social research relevant to the central problems of the day. Theory and Politics is included in the series, Studies in Contemporary German Social Thought, edited by Thomas McCarthy.

Helmut Dubiel has become not only an analyst of Critical Theory but a gifted contributor to its ongoing reception and development. He is currently a research fellow at the University of Frankfurt.