Items related to Frank Lloyd Wright Versus America: The 1930s 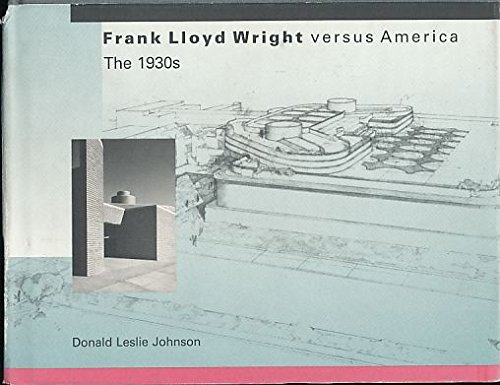 For his critics and biographers, the 1930s have always been the most difficult and challenging period of Frank Lloyd Wright's career. Following a scant dozen commissions in the 1920s, Wright experienced extremes of introspection, infamy, and self-adulation. Yet this decade also saw the beginning of a second flowering of his career and a renewed public recognition of his importance. This fresh account by Donald Johnson, the first to make use of the architect's long-inaccessible archives at Taliesin West, is also the first to provide a balanced evaluation of Wright in the 1930s. It separates Wright's design activities from his self-promotion and places his philosophy of individualism within the context of the times. The book unfolds as a sequence of biographical nodes, each concerned with a different problem in understanding Wright's life and work. Johnson provides surprising new information about the pervasive influence on Wright of his third wife Olgivanna and the mystic Georgi Gurdjieff, about the formation of the Taliesin Fellowship, and about Wright's relations with fellow architects and patrons. He also explores the development of his ideas on city planning, the publication of his autobiography, the significance of his travels during this decade, and the effects of his lectures on the architectural communities of the Soviet Union and Great Britain. "Frank Lloyd Wright versus America combines interpretation, factual revelation, and anecdote in a highly readable narrative, pursuing answers to such questions as why until 1936 "it took intelligence to hire Wright but only money thereafter" (Leonard Eaton), why Wright changed from "simply a very good architect to the Greatest AmericanGenius" (Reyner Banham), why the Soviets and British were fascinated by him, and why his architecture of this period differed so greatly from his previous work. Donald Leslie Johnson is an architectural historian who taught at Flinders University in Australia from 1972 until his retirement in 1988. Prior to that he practiced architecture in Seattle, Philadelphia, and Tucson and taught at Washington State, Adelaide, and Arizona universities.

Recounts Wright's life and career during the thirties, discusses the founding of the Taliesin Fellowship, and assesses his influence on other architects.