Items related to Hayek's The Constitution of Liberty

Hayek's The Constitution of Liberty 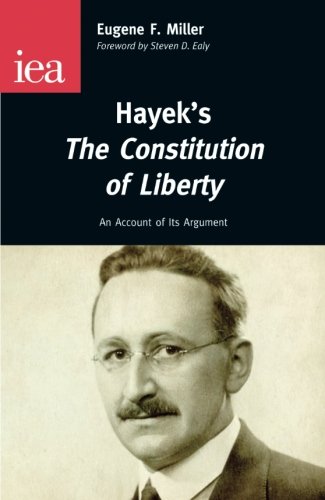 F A Hayek's 'The Constitution of Liberty' has a profound effect on the thinking of a generation of scholars, students and even politicians. There is a sense in which it is regarded as a manifesto of traditional liberalism. But the book has a complex underlying argument, and the philosophy is often difficult to understand for the non-specialist reader. This monograph, in the great tradition of IEA publications, both summarises and interprets the argument of 'The Constitution of Liberty' for a non-specialist audience. It does so by setting Hayek's seminal book in the context of his earlier and later works. This Occasional Paper by Eugene Miller is so full of original insights that it will also act as a very useful companion volume for those studying 'The Constitution of Liberty' in an academic setting. Indeed, it will also prove an invaluable work of reference for all who are interested in defending and promoting liberty.

"The leading figures of modern Czech prose writing are certainly here, but Bradbrook also spotlights lesser-known writers worthy of attention. Following a brief biography, she comments on and evaluates one (or more) of the subject's works with original insights that extend beyond mere description; she finishes with citations of translated works. . . . Recommended." " --Choice"

Eugene F. Miller was a professor of political science at the University of Georgia. His articles have appeared in many publications, including the "American Political Science Review," the "American Journal of Jurisprudence," the "Journal of Politics," the "Political Science Reviewer," and the "Review of Politics." He is editor of "David Hume: Essays, Moral, Political, and Literary." Stephen D. Ealy is a senior fellow at Liberty Fund, Inc., and a former professor of political science at Armstrong Atlantic State University.

2. Hayek's The Constitution of Liberty