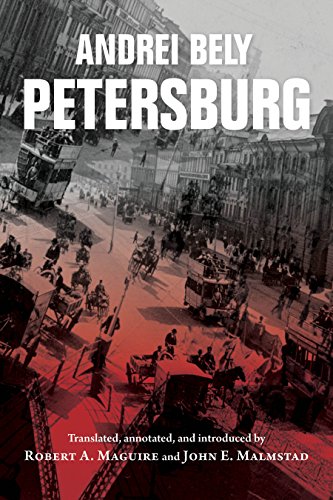 ... a translation that captures Bely’s idiosyncratic language and the rhythm of his prose, and without doing violence to English, conveys not only the literal meaning of the Russian but also its echoes and implications." ―The New York Review of Books

This translation of Petersburg finally makes it possible to recognize Andrei Bely’s great novel of 1913 as a crucial Russian instance of European modernist fiction." ―Inquiry

All people who go in for the B’s―Beckett, Brecht, Buñuel―better get hold of Bely. He came first, and he’s still the best." ―Washington Post Book World

... the most important, most influential and most perfectly realized Russian novel written in the 20th century." ―Simon Karlinsky

Here is the long-awaited, authoritative, unabridged translation of Petersburg, the Chef d’oeuvre of Symbolist writer Andrei Bely. Nabokov has ranked Petersburg beside Joyce’s Ulysses, Kafka’s Metamorphosis, and Proust’s À la recherche du temps perdu as one of the four great works of prose fiction of the twentieth century.

Andrei Bely (1880-1934), born Boris Nikolaevich Bugaev, was a Russian novelist, poet, and literary critic. His other works include The Silver Dove and Kotik Letaev. Robert A. Maguire was the Boris Bakhmeteff Professor Emeritus of Russian and Eastern European Studies at Columbia University. He was author of Exploring Gogol and Red Virgin Soil: Soviet Literature in the 1920's. John E. Malmstad is Samuel Hazzard Cross Research Professor of Slavic Languages and Literatures at Harvard University. He is author of Andrey Bely: Spirit of Symbolism and Mikhail Kuzmin: A Life in Art. Olga Matich is Professor Emerita of Slavic Languages and Literatures at the University of California, Berkeley. She is editor of Petersburg/Petersburg: Novel and City 1900 - 1921 and author of Erotic Utopia: The Decadent Imagination in Russia's Fin de Siecle.

Here is the long-awaited, authoritative, unabridged translation of "Petersburg", the Chef d'oeuvre of Symbolist writer Andrei Bely. Nabokov has ranked "Petersburg", beside Joyce's "Ulysses", Kafka's "Metamorphosis", and Proust's "La recherche du temps perdu", as one of the four great works of prose fiction of the twentieth century.