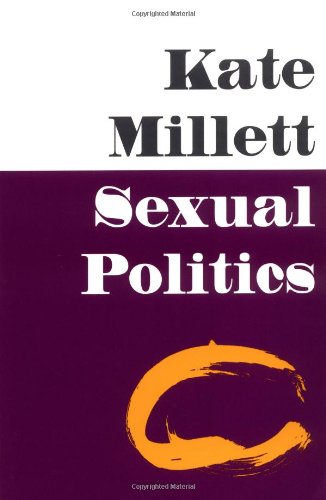 One of, if not the most important works on women's liberation, this book is once again back in print and is an essential piece of twentieth-century history and politics.

"Millett's doctoral-dissertation-turned-feminist classic offered me a useful example of a new kind of literary criticism and an exciting model for reading ... The book was a surprise best-seller, riding the wave of popular interest in women's liberation both inside and outside the university... Millett's work is being reintroduced by Illinois in part because it has genuine historical importance... The work also has something important to say to the next generation of feminists about where we have come from and where we might like to go... With Millett's out-of-print titles back on the shelf, readers of the twenty-first century will at least have the chance to wrestle with her particular brand of feminism and to discover first-hand why so many -- from detractors like Paglia to admirers like Stimpson -- have rushed to put the indomitable Kate Millett in her place." -- Laura Ciolkowski, Ms. Magazine "A passionate book by an acute literary analyst." -- New Yorker "Supremely entertaining to read, brilliantly conceived, overwhelming in its arguments, breathtaking in its command of history and literature." Christopher Lehmann-Haupt, New York Times "[Millett] translates the war of the sexes from the language of nineteenth century bedroom farce into the raw images of guerilla warfare... Even more than a political system, our sexual order is a 'habit of mind and a way of life.' Millett's book may go far toward subverting it." -- Time "Upon its original publication ... Sexual Politics was seen as provocative and groundbreaking material; today's reprint is just as essential to the residual feminist consciousness and political movement. Millett's analysis is cultural, historical, political, and literary." -- The Bloomsbury Review "A richly informative book." -- Washington Post Book World "A well documented intellectual masterpiece." -- Pittsburgh Press "The first scholarly justification for women's liberation." -- Christian Science Monitor

"Praised and denounced when it was first published in 1970, "Sexual Politics" not only explored history but also became part of it. Kate Millett's groundbreaking book fueled feminism's second wave, giving voice to the anger of a generation while documenting the inequities - neatly packaged in revered works of literature and art - of a complacent and unrepentant society. "Sexual Politics" laid the foundation for subsequent feminist scholarship by showing how cultural discourse reflects a systematized subjugation and exploitation of women. Identifying patriarchy as a socially conditioned belief system masquerading as nature, Millett demonstrates in detail how its attitudes and systems penetrate literature, philosophy, psychology, and politics. Her incendiary work rocked the foundations of the literary canon by castigating time-honored classics - from D. H. Lawrence's Lady Chatterley's "Lover" to Norman Mailer's "The Naked and the Dead" - for their use of sex to degrade and undermine women. A new introduction to this edition draws attention to some of the forms patriarchy has taken recently in consolidating its oppressive and dangerous control."