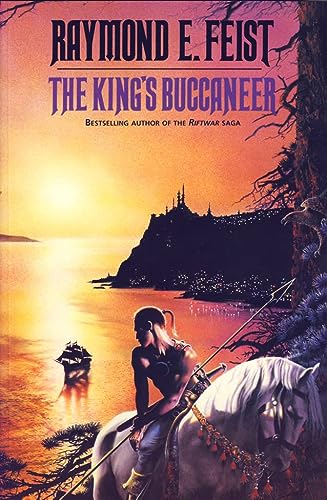 ‘ Epic scope...vivid imagination...a significant contribution to the growth of the field of fantasy.’
Washington Post

Long recovered from the ravages of the Riftwar, the land and the people of the Kingdom of the Isles thrive on the bounty of good times. Nicholas, youngest son of Prince Arutha of Krondor is intelligent and gifted, but vastly inexperienced in worldly matters. In hopes of hardening him, his father sends him and his squire, Harry, to live at rustic Castle Crydee to learn of life beyond the halls of privilege. Thus begins the most harrowing experience of their young lives. Within weeks of Nicholas's arrival, Crydee is viciously attacked by assailants unknown. The result: murder, massive destruction, and the abduction of two young noblewomen, friends to the prince. And Crydee isn't the only town that's been hit - towns up and down the coast have suffered the same merciless devastation. From out of the wreckage two facts become clear. The raiders have come from the distant Sunset Islands, home to pirates of every stripe - and possibly even farther away than that. But more significant, these are no ordinary pirates: their mission is connected to dark magical forces that have threatened the Kingdom before. As brother to the future king, Nicholas feels compelled to follow the abductors and rescue those taken from Crydee - but the threat he ultimately faces is one that places the fate of all of his people in his inexperienced lands.

Book Description HarperCollins, 1993. Paperback. Condition: Used; Good. Dispatched, from the UK, within 48 hours of ordering. This book is in good condition but will show signs of previous ownership. Please expect some creasing to the spine and/or minor damage to the cover. Aged book. Tanned pages and age spots, however, this will not interfere with reading. Seller Inventory # CHL6282428

Book Description Paperback. Condition: Good. The book has been read but remains in clean condition. All pages are intact and the cover is intact. Some minor wear to the spine. Seller Inventory # GOR000995854

Book Description HarperCollins 07/06/1993, 1993. Condition: Very Good. Shipped within 24 hours from our UK warehouse. Clean, undamaged book with no damage to pages and minimal wear to the cover. Spine still tight, in very good condition. Remember if you are not happy, you are covered by our 100% money back guarantee. Seller Inventory # 6545-9780246133298

Book Description HarperCollins, 1993. Paperback. Condition: Very Good. KingÔ s Buccaneer This book is in very good condition and will be shipped within 24 hours of ordering. The cover may have some limited signs of wear but the pages are clean, intact and the spine remains undamaged. This book has clearly been well maintained and looked after thus far. Money back guarantee if you are not satisfied. See all our books here, order more than 1 book and get discounted shipping. . Seller Inventory # 7719-9780246133298

Book Description Grafton, HarperCollins Publishers, Limited, 1993. Condition: Good. New Edition. Shows some signs of wear, and may have some markings on the inside. Seller Inventory # 13458090-6

Book Description HarperCollins 07/06/1993, 1993. Condition: Good. Will be shipped promptly from UK warehouse. Book is in good condition with no missing pages, no damage or soiling and tight spine. There may be some dog-eared pages showing previous use but overall a great book. Seller Inventory # 9053-9780246133298