Items related to The Diaries of a Cabinet Minister: Minister of Housing,...

Crossman, Richard The Diaries of a Cabinet Minister: Minister of Housing, 1964-66 v. 1 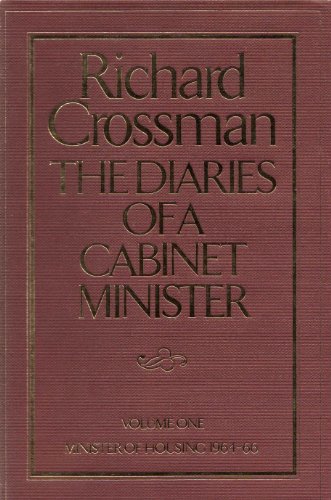 "Wow! I've just finished this book and I can say it is a far more in-depth look at Cabinet government than any other I've read. Crossman may not be a big name today but in his day he was one of the Big Beasts, senior Cabinet ministers who wrestled for supremacy and jostled to win the Prime Minister's favour and backing. He dictated these diaries which were transcribed and published by his wife after his death, in the face of opposition from the government of the day. Crossman is gloriously indiscreet and straight-talking, revealing how deals are done and colleagues are double-crossed and undermined. The diaries show PM Harold Wilson as a principled but soft-minded leader who played different camps off against each other as he struggled to make up his own mind, and how ministers tried to use the press and to corrall civil servants, with haphazard results. The characters include the drunken and mercurial George Brown, the passionate but ineffective Barbara Castle, the ambitious but flawed Jim Callaghan and the clever but unpolitical Roy Jenkins. It may seem like ancient history, but it's still wonderfully insightful and relevant to the modern reader. In many ways little has changed and in other ways the diaries provide a fascinating contrast with the "sofa government" and spin of New Labour. Wilson strove to achieve a collective style of government rather than the more "presidential" model we have today, but that meant he often presided over flaming rows or was browbeaten into submission by his very own allies, some of whom were deliberately plotting disaster to unseat him. And it seems extraordinary how Jim Callaghan, his eventual successor, was able to remain in Cabinet and plot against him from within. This is a pleasure to read.