Items related to Breath: The New Science of a Lost Art

Nestor, James Breath: The New Science of a Lost Art

Breath: The New Science of a Lost Art 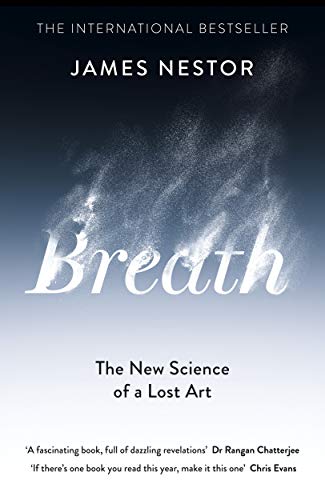 300,000 years ago, Homo sapiens had bigger skulls. Cooked food meant our heads shrunk; alongside a growing brain, our airways got narrower. Urbanisation then led us to breathe less deeply and less healthily. And so today more than 90% of us breathe incorrectly. So we might have been breathing all our life, but we need to learn how to breathe properly!

In Breath, James Nestor meets cutting-edge scientists at Harvard and experiments on himself in labs at Stanford to see the impact of bad breathing. He revives the lost, and recently scientifically proven, wisdom of swim coaches, Indian mystics, stern-faced Russian cardiologists, Czechoslovakian Olympians and New Jersey choral conductors - the world's foremost 'pulmonauts' - to show how breathing in specific patterns can trigger our bodies to absorb more oxygen, and he explains the benefits for everyone that result, from staying healthy and warding off anxiety to improving focus and losing weight.

Breath is a fascinating ride through evolution, medicine and physiology - and extreme sports. But mostly it explores you. Structured as a journey with chapters from the mouth and nose through to the lungs and nervous system, it is non-fiction at its breath-taking best.

The reader could not wish for a better guide. . . DEEP is a fascinating, informative, exhilarating book, and I wager, it will at the very least have you testing how long you can hold your breath (Wall Street Journal, on DEEP)

Truly breathtaking. . . Nestor gets right in with the competitors and rogue scientists who are unearthing mysteries of the deep and its inhabitants that we can't even imagine, in a book that's engaging and eye-popping (Esquire, on DEEP)

Fascinating. . . DEEP is beautiful and terrifying, brutal and hopeful. Nestor pulls us below the surface into a world far beyond imagining and opens our eyes to these unseen places (Dallas Morning News, on DEEP)

The deeper the book ventures into the ocean, the more dramatic and unusual the organisms therein and the people who observe them. . . Through Nestor's eyes and his stories, it's a journey well worth taking (David Epstein New York Times Book Review, on DEEP)

With a "wow" on every page, and brimming with vivid portraits, lucid scientific explanations, gripping (and funny) first-person accounts, and urgent facts about the ocean's endangerment, Nestor's DEEP is galvanizing, enlightening, and invaluable (Booklist, starred review, on DEEP)

With verve and humor, the author describes his own risk-taking attempts to understand the ocean's ancient secrets and the daring and brilliant people who have dedicated their lives to probing deeper. . . Nestor's writing is sharp, colorful, and thrilling. . . An adventurous and frequently dazzling look at our planet's most massive habitat (Kirkus Reviews, on DEEP)

DEEP is beguiling and profoundly informative book that reminds us, on every page, that our Earth
is still awash in mystery and wonder

(Jon Mooallem, author of Wild Ones, on DEEP)

Put DEEP on the top of your reading list. The book will do for the oceans what Cosmos did for space. It's mind-bending, intrepid, and inspiring (Po Bronson, on DEEP) About the Author:

James Nestor has written for Scientific American, Outside Magazine, Men's Journal, National Public Radio, The New York Times, and more. His book, DEEP: Freediving, Renegade Science, and What The Ocean Tells Us About Ourselves, was a Finalist for the PEN American Center Best Sports Book of the Year and a BBC Radio 4 Book of the Week. In 2015 Nestor received a MacArthur Foundation grant to develop a short documentary, The Click Effect, for The New York Times.

1. Breath: The New Science of a Lost Art (Hardback)

Book Description Hardback. Condition: New. Language: English. Brand new Book. PAPERBACK EDITION NOW AVAILABLE'I highly recommend this book' Wim HofTHE INTERNATIONAL BESTSELLERAS HEARD ON THE CHRIS EVANS SHOWThere is nothing more essential to our health and wellbeing than breathing: take air in, let it out, repeat 25,000 times a day. Yet, as a species, humans have lost the ability to breathe correctly, with grave consequences. In Breath, journalist James Nestor travels the world to discover the hidden science behind ancient breathing practices to figure out what went wrong and how to fix it.Modern research is showing us that making even slight adjustments can:- jump-start athletic performance- rejuvenate internal organs- halt snoring, allergies, asthma and autoimmune disease, and even straighten scoliotic spinesNone of this should be possible, and yet it is. Drawing on thousands of years of ancient wisdom and cutting-edge studies in pulmonology, psychology, biochemistry and human physiology, Breath turns the conventional wisdom of what we thought we knew about our most basic biological function on its head.You will never breathe the same again._____________________________'If there's one book you read this year, make it this one' Chris Evans'Who would have thought something as simple as changing the way we breathe could be so revolutionary for our health, from snoring to allergies to immunity? James Nestor is the perfect guide to the pulmonary world and has written a fascinating book, full of dazzling revelations' Dr Rangan Chatterjee, author of Feel Better in FiveA fascinating scientific, cultural, spiritual and evolutionary history of the way humans breathe - and how we've all been doing it wrong for a long, long time. I already feel calmer and healthier just in the last few days, from making a few simple changes in my breathing, based on what I've read. Our breath is a beautiful, healing, mysterious gift, and so is this book' Elizabeth Gilbert, author of Eat, Pray, Love. Seller Inventory # AAZ9780241289075

3. Breath: The New Science of a Lost Art

4. Breath: The New Science of a Lost Art

5. Breath: The New Science of a Lost Art

6. Breath: The New Science of a Lost Art

7. Breath: The New Science of a Lost Art