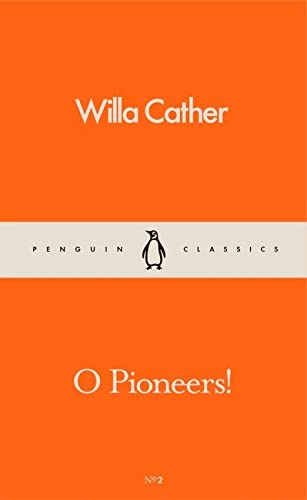 'She had felt as if her heart were hiding down there, somewhere, with the quail and the plover and all the little wild things that crooned or buzzed in the sun...'

A rapturous work of savage beauty, Willa Cather's 1913 tale of a pioneer woman who tames the wild, hostile lands of the Nebraskan prairie is also the story of what it means to be American.

Willa Cather's second novel is abundant with interwoven themes. In one respect Cather bears witness to the early 20th-century Pioneers. The farmer taming the wild Northern States of America, battling with the elements and an unforgiving land to create a home, family and livlihood. On another level O Pioneers! is the story of Alexandra Bergson. Due to the death of her father she becomes the head of the household and spends her time between protecting her younger brother and out in the countryside that has become hers. Overshadowed somewhat by the more popular My Antonia this early work of Cather's is a much admired example of early 20th-century American fiction. O Pioneers! is a powerful testimony to love, the land and the pioneering spirit. --Jon Smith

The land belongs to the future... that's the way it seems to me....I might as well try to will the sunset over there to my brother's children. We come and go, but the land is always here. And the people who love it and understand it are the people who own it -- for a little while.-
O Pioneers! (1913) was Willa Cather's first great novel, and to many it remains her unchallenged masterpiece. No other work of fiction so faithfully conveys both the sharp physical realities and the mythic sweep of the transformation of the American frontier -- and the transformation of the people who settled it. Cather's heroine is Alexandra Bergson, who arrives on the wind-blasted prairie of Hanover, Nebraska, as a girl and grows up to make it a prosperous farm. But this archetypal success story is darkened by loss, and Alexandra's devotion to the land may come at the cost of love itself.
At once a sophisticated pastoral and a prototype for later feminist novels, O Pioneers! is a work in which triumph is inextricably enmeshed with tragedy, a story of people who do not claim a land so much as they submit to it and, in the process, become greater than they were.

Book Description Paperback. Condition: Very Good. The book has been read, but is in excellent condition. Pages are intact and not marred by notes or highlighting. The spine remains undamaged. Seller Inventory # GOR007705537

Book Description Paperback. Condition: Good. Small annotations to some pages, may include notes, highlighting or underlining Good condition is defined as: a copy that has been read but remains in clean condition. All of the pages are intact and the cover is intact and the spine may show signs of wear. The book may have minor markings which are not specifically mentioned. Most items will be dispatched the same or the next working day. Seller Inventory # wbb0018318820