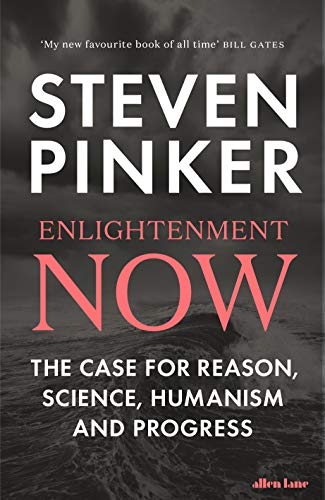 'My new favourite book of all time' Bill GatesIs modernity really failing? Or have we failed to appreciate progress and the ideals that make it possible?If you follow the headlines, the world in the 21st century appears to be sinking into chaos, hatred, and irrationality. Yet Steven Pinker shows that this is an illusion - a symptom of historical amnesia and statistical fallacies. If you follow the trendlines rather than the headlines, you discover that our lives have become longer, healthier, safer, happier, more peaceful, more stimulating and more prosperous - not just in the West, but worldwide., Such progress is no accident: it's the gift of a coherent and inspiring value system that many of us embrace without even realizing it. These are the values of the Enlightenment: of reason, science, humanism and progress.The challenges we face today are formidable, including inequality, climate change, Artificial Intelligence and nuclear weapons. But the way to deal with them is not to sink into despair or try to lurch back to a mythical idyllic past; it's to treat them as problems we can solve, as we have solved other problems in the past., In making the case for an Enlightenment newly recharged for the 21st century, Pinker shows how we can use our faculties of reason and sympathy to solve the problems that inevitably come with being products of evolution in an indifferent universe. We will never have a perfect world, but - defying the chorus of fatalism and reaction - we can continue to make it a better one.

My new favourite book of all time (Bill Gates)

This is the biggest story of our time. It's about the many ways in which the world is improving, and why we don't believe it (Fraser Nelson Spectator)

Pinker is right. Not just a bit right, but completely, utterly, incontrovertibly right ... for most people, life is better, even if they don't realise it (Dominic Sandbrook Daily Mail)

Awesome. The confidence with which Pinker tears through the issues that cause such deep anxiety today is compelling (William Davies Guardian)

A characteristically fluent, decisive and data-rich demonstration of why, given the chance to live at any point in human history, only a stone-cold idiot would choose any time other than the present (Sam Leith Spectator)

A new, optimistic view of the world ... Things are not as bad as your Facebook news feed makes them seem ... a cheerful, contrarian tract for dark times (Niall Ferguson Sunday Times)

A goldmine of startling graphs and killer facts about the way we live now. Everyone should read this book and, just for once, be enthralled by what humankind has achieved (Iain Macwhirter Herald)

Today we are living healthier, wealthier lives - and it's thanks to the values of the Enlightenment ... a passionate book in praise of Enlightenment values (David Aaronovitch The Times)

Steven Pinker is one of the world's most influential thinkers and writers on the human condition. His popular and highly praised books include The Better Angels of Our Nature, The Sense of Style, The Stuff of Thought, The Blank Slate, How the Mind Works, and The Language Instinct. The recipient of several major awards for his teaching, books, and scientific research, Pinker is Harvard College Professor and Johnstone Family Professor of Psychology at Harvard University. He also writes frequently for The New York Times, the Guardian and other publications. He has been named Humanist of the Year, Prospect magazine's "The World's Top 100 Public Intellectuals," Foreign Policy's "100 Global Thinkers," and Time magazine's "The 100 Most Influential People in the World Today."

Book Description Paperback. Condition: Very Good. The book has been read, but is in excellent condition. Pages are intact and not marred by notes or highlighting. The spine remains undamaged. Seller Inventory # CIN000357467

Book Description Paperback. Condition: Very Good. The book has been read, but is in excellent condition. Pages are intact and not marred by notes or highlighting. The spine remains undamaged. Seller Inventory # GOR008882195

Book Description Hardcover. Condition: Good. A tan to the page edges/pages . Ex library copy with usual stamps & stickers Good condition is defined as: a copy that has been read but remains in clean condition. All of the pages are intact and the cover is intact and the spine may show signs of wear. The book may have minor markings which are not specifically mentioned. Most items will be dispatched the same or the next working day. Seller Inventory # wbb0018798162