Items related to The Inventor of Stereo : The life and works of Alan...

Alexander, Robert The Inventor of Stereo : The life and works of Alan Dower Blumlein

The Inventor of Stereo : The life and works of Alan Dower Blumlein 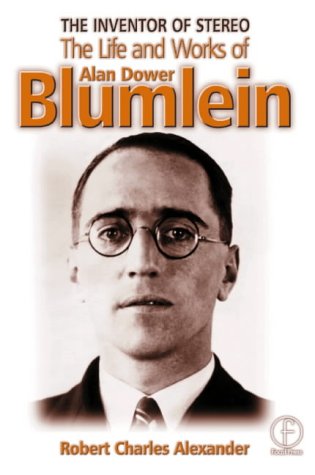 This book is the definitive study of the life and works of one of Britain's most important inventors who, due to a cruel set of circumstances, has all but been overlooked by history.

Alan Dower Blumlein led an extraordinary life in which his inventive output rate easily surpassed that of Edison, but whose early death during the darkest days of World War Two led to a shroud of secrecy which has covered his life and achievements ever since.

His 1931 Patent for a Binaural Recording system was so revolutionary that most of his contemporaries regarded it at as more than 20 years ahead of its time. Even years after his death, the full magnitude of its detail had not been fully utilized. Among his 128 Patents are the principle electronic circuits critical to the development of the world's first electronic television system. During his short working life, Blumlein produced patent after patent breaking entirely new ground in electronic and audio engineering.

During the Second World War, Alan Blumlein was deeply engaged in the very secret work of radar development and contributed enormously to the system eventually to become 'H2S'- blind bombing radar. Tragically, during an experimental H2S flight in June 1942, the Halifax bomber in which Blumlein and several colleagues were flying, crashed and all aboard were killed. He was just days short of his 39th birthday.

For many years there have been rumours about a biography of Alan Blumlein, yet none has been forthcoming. This is the world's first study of a man whose achievements should rank among those of the greatest Britain has produced. This book provides detailed knowledge of every one of his patents and the process behind them, while giving an in depth study of the life and times of this quite extraordinary man.

Robert Charles Alexander is a consultant audio engineer having worked in the professional audio industry since 1983.

Born in Hampstead, London in June 1964, he was educated at the renowned Rudolph Steiner education system where he trained in classical music, reading, composition and arrangement. Following graduation from college in London, at the age of 21 he was instrumental in the organistaion of a major fund-raising project for the 1985 Live Aid appeal.

In 1989, he travelled to America working in Los Angeles, before moving on to Australia in 1990. While in Sydney he first studied and then began lecturing in audio engineering at the world's largest audio engineering college, subsequently returning to London in 1992 where he became a principal lecturer.

In 1996, he was appointed Editor of 'Audio Media', the world's leading professional audio technology magazine, and became Executive Editor of the title with the launch of its US version in late 1997.

During his time with 'Audio Media' he travelled extensively throughout the world writing key articles on the industry and gaining a reputation for keen, concise writing underlined by detailed research.

Since early 1999, he has become a full-time consultant to the professional music industry, though he continues to lecture at universities and colleges around Britain. He is a member of the Music Producers Guild, an associate member of the Institute of Broadcast Sound and a member of the Audio Engineering Society.

'Fascinating man, fascinating inventions, fascinating story behind the 30 year wait for a biography. We recommend you read it - our congratulations to the author.'
Everyday Practical Electronics, November 1999

'Thanks for the quick delivery of the Blumlein book, for which we have been waiting at least 25 years! ... In the audio community, every enthusiast will wish to own this book.'
Audio Amateur Incorporated, September 1999

'One of the most complete accounts of the development of Blumlein's invention. ...A fine tribute which must be considered a standard reference.'
Grampophone, 1999 Awards Issue

'I recommend this book for all aspiring - and those of us in need of inspiring - engineers'
Studio Sound, December 1999

Reviews
'Fascinating man, fascinating inventions, fascinating story behind the 30 year wait for a biography. We recommend you read it - our congratulations to the author.' Everyday Practical Electronics, November 1999

'Thanks for the quick delivery of the Blumlein book, for which we have been waiting at least 25 years! ... In the audio community, every enthusiast will wish to own this book.' Audio Amateur Incorporated, September 1999

1. The Inventor of Stereo : The life and works of Alan Dower Blumlein

2. Exploring Engineering: An Introduction for Freshmen to Engineering and to the Design Process.(a first printing)