Items related to The Battle of Waterloo Experience

The Battle of Waterloo Experience 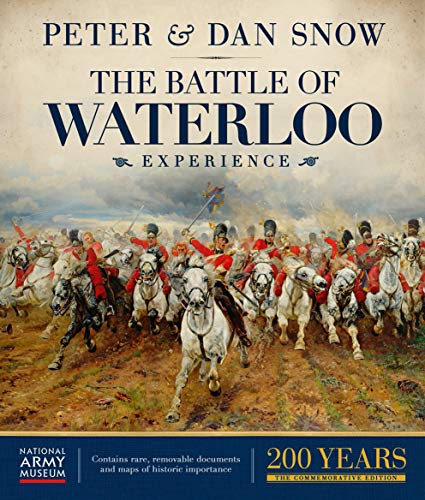 In association with the National Army Museum, well known military historians, journalists and broadcasters Peter and Dan Snow tell the story of one of the world's most famous and important battles. The Battle of Waterloo Experience provides what no other book on the battle contains—removable facsimiles of historic archival documents. Readers can relive this extraordinary moment in history by holding and examining rare or previously unpublished sketch maps, letters, orders, official papers and proclamations held by the National Army Museum and other archives and museums around Europe.

Peter and Dan Snow examine the strengths and weaknesses of the leaders, the armies and their weapons. Like all the greatest battles, Waterloo is steeped in controversy—the battle ended in decisive victory, but it might so easily have turned out differently. The Snows explore all the questions the battle raised. Who made mistakes? Whose victory really was it? Would Wellington have won without Blücher and his Prussians? What was the main cause of the French defeat?

This is an exceptional release and the Snows words linked with outstanding imagery is a masterclass in history book making. The 200th anniversary couldn t have been commemorated any better. --History at War Magazine

Peter Snow is a highly respected journalist, author and broadcaster. He was ITN's Diplomatic and Defence Correspondent from 1966 to 1979, and presented Newsnight from 1980 to 1997. An indispensable part of election nights, he has also covered military matters on and off the world's battlefields for 40 years. Dan Snow is an historian who has researched, written and presented several documentaries and appears regularly on the BBC's One Show as their "History Man". His writing has appeared in The Times, the Sunday Times, the Guardian, the Daily Express and BBC History Magazine. Educated at the University of Oxford, he has joint British and Canadian citizenship. Together they presented the BAFTA award winning Battlefield Britain and wrote the accompanying bestselling book.

1. The Battle of Waterloo Experience

2. The Battle of Waterloo Experience

3. The Battle of Waterloo Experience