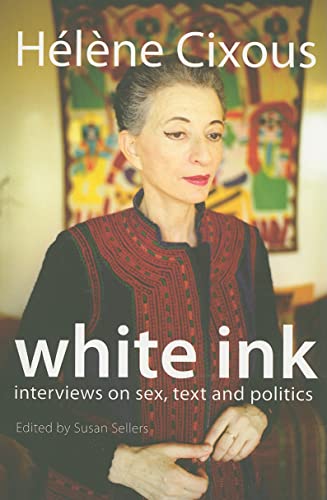 These interviews with Helene Cixous offer invaluable insight into her philosophy and criticism. Culled from newspapers, journals, and books, White Ink collects the best of these conversations, which address the major concerns of Cixous's critical work and features two dialogues with twentieth-century intellectuals Michel Foucault and Jacques Derrida. The interviews in White Ink span more than three decades and include a new conversation with Susan Sellers, the book's editor and a leading Cixous scholar and translator. Cixous discusses her work and writing process. She shares her views on literature, feminism, theater, autobiography, philosophy, politics, aesthetics, religion, ethics, and human relations, and she reflects on her roles as poet, playwright, professor, woman, Jew, and, her most famous, "French feminist theorist." Sellers organizes White Ink in such a way that readers can grasp the development of Cixous's commentary on a series of vital questions. Taken together, the revealing performances in White Ink provide an excellent introduction this thinker's brave and vital work--each one an event in language and thought that epitomizes Cixous's intellectual and poetic force.

"Everything that concerns Hélčne Cixous is of interest. To my knowledge, there exists no other volume quite like this one. These interviews reveal the different aspects of Cixous's work with its underlying insistence on writing itself." --Verena Conley, Professor of Comparative Literature, Harvard University

Book Description Condition: New. Brand New Original US Edition.We Ship to PO BOX Address also. EXPEDITED shipping option also available for faster delivery.This item may ship fro the US or other locations in India depending on your location and availability. Seller Inventory # AUDECC-6483