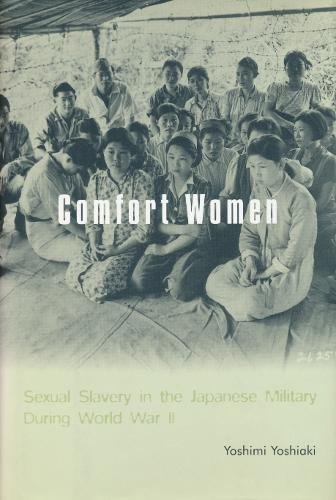 Available for the first time in English, this is the definitive account of the practice of sexual slavery the Japanese military perpetrated during World War II by the researcher principally responsible for exposing the Japanese government's responsibility for these atrocities. The large scale imprisonment and rape of thousands of women, who were euphemistically called "comfort women" by the Japanese military, first seized public attention in 1991 when three Korean women filed suit in a Toyko District Court stating that they had been forced into sexual servitude and demanding compensation. Since then the comfort stations and their significance have been the subject of ongoing debate and intense activism in Japan, much if it inspired by Yoshimi's investigations. How large a role did the military, and by extension the government, play in setting up and administering these camps? What type of compensation, if any, are the victimized women due? These issues figure prominently in the current Japanese focus on public memory and arguments about the teaching and writing of history and are central to efforts to transform Japanese ways of remembering the war.Yoshimi Yoshiaki provides a wealth of documentation and testimony to prove the existence of some 2,000 centers where as many as 200,000 Korean, Filipina, Taiwanese, Indonesian, Burmese, Dutch, Australian, and some Japanese women were restrained for months and forced to engage in sexual activity with Japanese military personnel. Many of the women were teenagers, some as young as fourteen. To date, the Japanese government has neither admitted responsibility for creating the comfort station system nor given compensation directly to former comfort women.This English edition updates the Japanese edition originally published in 1995 and includes introductions by both the author and the translator placing the story in context for American readers.

"Crucial reading." -- Katha Pollitt, The Nation "Yoshimi, a reputable historian/scholar... has meticulously sleuthed out chronological data, exposing from its bitter outset that sordid, endless business of sexual slavery. Yoshimi's account extends to the essence of feminist political purpose... The book makes solid headway toward legitimizing his demands for public access to still-secret documents; acknowledging and apologizing for all violations of international law and war crimes and for failure to punish guilty parties; rehabilitating and compensating victims... A vigorous work, enhanced by a precise, graceful translation." -- Choice " Comfort Women's command of documentary materials makes it a landmark for historians, human rights activists and general readers." -- Georgette Fleischer, Los Angeles Times Book Review "As a piece of historical literature, Comfort Women is interesting as an in-depth look at the politics and psychology of a particular time, as much as it is a chronology of what happened to the comfort women and why they were forgotten. One of the most interesting things about it, however, is its unique place in history as the virtual smoking gun that supplied the damning evidence the world needed to hear in order to fully understand and come to grips with this issue...A convincing writer and powerful advocate, Yoshimi has shown by words and actions his willingness to campaign not only as an intellectual who loves the truth, but as a person of tough moral fiber who will stand up for human rights, even as a majority of one." -- Martha Vickery, Korean Quarterly "Yoshiaki's invaluable study explodes the claims of Japanese right-wing nationalists that comfort women were merely wartime prostitutes... Citing official military records and correspondence, he proves beyond doubt that the victims of this monstrous system were actually sex slaves subjected to repetitive rape and violence... [this book] belongs in most libraries." -- Library Journal (starred review) "it is necessary and compelling reading...invaluable addition...fascinating" -- Wendy Anderson, Asian Studies Review

Yoshimi Yoshiaki is professor of modern Japanese history at Chuo University in Tokyo, and a founding member of the Center for Research and Documentation on Japan's War Responsibility.