Items related to The Germans (European Perspectives: A Series in Social...

The Germans (European Perspectives: A Series in Social Thought and Cultural Criticism) 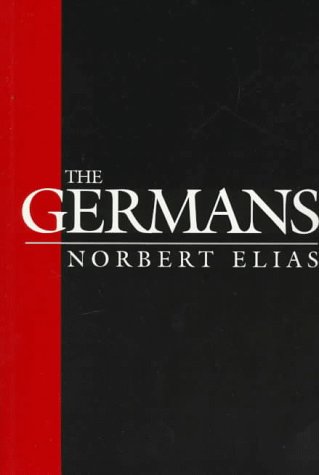 The last major work by one of our century's most influential social theorists,The Germans is a penetrating account of German social development, from the seventeenth century to the present. Enhanced by his deep understanding of other Western European nations, Norbert Elias's incisive analyses of nationalism, violence, and the breakdown of civilization will be an indispensable resource for those interested in modern European history and sociology and in European studies.

"Once in a while a book emerges which far surpasses in scope and scale and depth even the best of our worthy scholarship ... this last collection of Norbert Elias′s could not be more timely. This is a civil book. To read it civilises. One might recommend it to the survivors of Mrs Thatcher′s seminar." Political Quarterly

"His academic approach is both fascinating and challenging and his book must be rated as an extremely valuable contribution to the debate about German political traditions." German Politics

"This study is particularly brilliant, even for the great Elias. Here he returns to the shame analysis that he began in The Civilizing Process, clarifying great swaths of German and European cultural history. A must for your reading list." Thomas J. Scheff, University of California, Santa Barbara

"Undoubtedly, this is one of the most original sociological minds ever, and The Germans is his magnum opus. One might expect a great book, and a great book this is." Zygmunt Bauman, University of Leeds

Norbert Elias is one of the most important and influential social thinkers of the twentieth century. Towards the end of his life he completed a major study of German society and culture in which he used his key ideas to analyse the development of the country in which he had lived for many years. The Germans is Elias′s last great work and it displays all of the breadth, brilliance and originality of his other major writings.

Through a skilful interweaving of empirical evidence and theoretical reasoning, Elias explores the ways in which the particular features of German personality, social structure and behaviour, arose out of Germany′s past. Proceeding chronologically from the Enlightenment to the present day, he draws particular attention to the devastation wrought in the seventeenth century by the Thirty Years′ War; Germany′s late unification compared to countries such as Britain and France which were unified much earlier and, as a result, enjoyed a much less discontinuous pattern of history and social development; and the series of wars under the leadership of the militaristic ruling strata of Prussia during which German unification eventually took place. In the course of this unification, he argues, large sections of the middle classes abandoned the humanistic values which had hitherto predominated in their social circles and became "brutalized".

Elias then examines the weakening of state control in Germany after the First World War and the emergence of the private armies of the Freikorps, destabilizing the fledgling Weimar Republic and contributing to a terrorist movement that strove for the restoration of authoritarian rule. He argues that these events, which culminated in the rise of Hitler and the Holocaust, occurred as a result of decisions made in a context of national crisis by ruling groups which enjoyed widespread popular support, especially among the middle classes.

The Germans is a classic work. It will be welcomed by students and researchers in sociology and social theory, politics, modern European history and German Studies.

1. The Germans: Power Struggles and the Development of Habitus in the Nineteenth and Twentieth Centuries