Items related to The Boys in the Boat

Daniel James Brown The Boys in the Boat

The Boys in the Boat 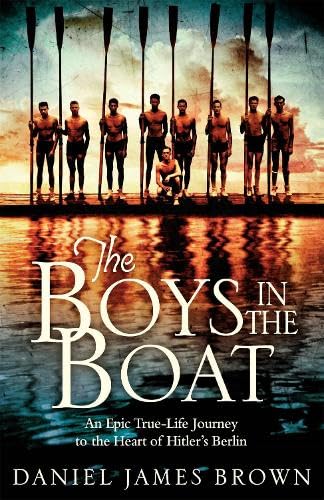 Cast aside by his family at an early age, abandoned and left to fend for himself in the woods of Washington State, young Joe Rantz turns to rowing as a way of escaping his past.

What follows is an extraordinary journey, as Joe and eight other working-class boys exchange the sweat and dust of life in 1930s America for the promise of glory at the heart of Hitler’s Berlin. Stroke by stroke, a remarkable young man strives to regain his shattered self-regard, to dare again to trust in others – and to find his way back home.

Told against the backdrop of the Great Depression, The Boys in the Boat is narrative non-fiction of the first order; a personal story full of lyricism and unexpected beauty that rises above the grand sweep of history, and captures instead the purest essence of what it means to be alive.

‘The Boys in the Boat is not only a great and inspiring true story; it is a fascinating work of history’ Nathaniel Philbrick, author of In the Heart of the Sea

‘I really can't rave enough about this book . . . I read the last fifty pages with white knuckles, and the last twenty-five with tears in my eyes’ David Laskin, author of The Children's Blizzard and The Long Way Home

‘A thrilling, heart-thumping tale of a most remarkable band of rowing brothers’ Timothy Egan, author of The Worst Hard Time

The remarkable story of Joe Rantz, a charismatic young man born dirt poor in Washington who managed to overcome the challenges of the Great Depression, and a complicated family life full of painful memories through his love of sport. What follows is an extraordinary journey, as Joe and 8 other young men throw themselves into rowing at the 1936 Olympics, a race that will take them to the very limits of personal endurance and in front of Adolf Hitler himself. A true non-fiction epic in the tradition of 'Seabiscuit' and 'The Immortal Life Of Henrietta Lacks'.

'The Boys in the Boat is a triumph of great writing matched with a magnificent story. Daniel James Brown strokes the keyboard like a master oarsman, blending power and grace to propel readers toward a heart-pounding finish.’

Mitchell Zuckoff, author of Lost in Shangri-La and Frozen in Time.

‘Chariots of Fire – with oars [Brown’s] descriptions of the key races are exciting and dramatic, and it is impossible not to get wrapped up in the emotion.’ The Times

‘Like Laura Hillenbrand’s Seabiscuit and Michael Lewis’s Moneyball before it, The Boys in the Boat has all the ingredients for a film adaptation. Written with cinematic precision, it tells the story of Joe Rantz, who grows up in obscurity during the Great Depression only to triumph over adversity as one of the US rowing crew that won gold at the 1936 Berlin Olympics [...] a moving, enlightening and gripping tale’ Financial Times

‘In 1936 nine working-class American boys burst from their small towns into the international limelight, unexpectedly wiping the smile off Adolf Hitler’s face by beating his vaulted German team to capture the Olympic gold medal. Daniel James Brown has written a robust, emotional snapshot of an era, a book you will recommend to your best friends.’

James Bradley, Flags of Our Fathers, Flyboys, The Imperial Cruise

‘For this nautical version of Chariots of Fire, Brown crafts an evocative, cinematic prose ... studded with engrossing explanations of rowing technique and strategy, exciting come-from-behind race scenes, and the requisite hymns to "mystic bands of trust and affection" forged on the water.’ Publishers Weekly

‘The Boys in the Boat is the thrilling true story of the 1936 University of Washington crew team, which went from backwater obscurity to a gold medal at the 1936 Berlin Olympics. [...] A story this breathtaking demands an equally compelling author, and Brown does not disappoint. The narrative rises inexorably, with the final 50 pages blurring by with white-knuckled suspense as these all-American underdogs pull off the unimaginable.’ The Seattle Times

Buy Used
Condition: Very Good
All orders are dispatched the following... Learn more about this copy

Book Description Macmillan, 2013. Hardcover. Condition: Very Good. All orders are dispatched the following working day from our UK warehouse. Established in 2004, we have over 500,000 books in stock. No quibble refund if not completely satisfied. Seller Inventory # mon0005309977

Book Description Paperback. Condition: Very Good. The book has been read, but is in excellent condition. Pages are intact and not marred by notes or highlighting. The spine remains undamaged. Seller Inventory # GOR005025513

Book Description Paperback. Condition: Fair. A readable copy of the book which may include some defects such as highlighting and notes. Cover and pages may be creased and show discolouration. Seller Inventory # GOR006591472

Book Description Macmillan, 2013. Condition: Good. This is an ex-library book and may have the usual library/used-book markings inside.This book has hardback covers. In good all round condition. Dust Jacket in good condition. Please note the Image in this listing is a stock photo and may not match the covers of the actual item,750grams, ISBN:9780230763845. Seller Inventory # 7719549

Book Description Macmillan, 2013. Hardcover. Condition: Used; Good. **Simply Brit** Shipped with Premium postal service within 24 hours from the UK with impressive delivery time. We have dispatched from our book depository; items of good condition to over ten million satisfied customers worldwide. We are committed to providing you with reliable and efficient service at all times. Seller Inventory # 1218786

Book Description Macmillan, 2013. Hardcover. Condition: Used; Good. **SHIPPED FROM UK** We believe you will be completely satisfied with our quick and reliable service. All orders are dispatched as swiftly as possible! Buy with confidence! Aloysius Ihezie. Seller Inventory # 1671970

Book Description -. Hardcover. Condition: Very Good. The Boys In The Boat This book is in very good condition and will be shipped within 24 hours of ordering. The cover may have some limited signs of wear but the pages are clean, intact and the spine remains undamaged. This book has clearly been well maintained and looked after thus far. Money back guarantee if you are not satisfied. See all our books here, order more than 1 book and get discounted shipping. Seller Inventory # 7719-9780230763845

Book Description Macmillan 06/06/2013, 2013. Hardcover. Condition: Very Good. Shipped within 24 hours from our UK warehouse. Clean, undamaged book with no damage to pages and minimal wear to the cover. Spine still tight, in very good condition. Remember if you are not happy, you are covered by our 100% money back guarantee. Seller Inventory # 6545-9780230763845