Items related to A Legacy of Liberation: Thabo Mbeki and the Future...

Gevisser, Mark A Legacy of Liberation: Thabo Mbeki and the Future of the South African Dream (0)

A Legacy of Liberation: Thabo Mbeki and the Future of the South African Dream (0) 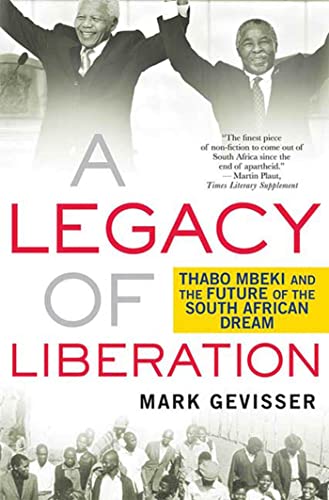 A gripping social history of South Africa's past and future and beautifully narrated by one of Africa's most esteemed journalists, A Legacy of Liberation sheds light on the future of the nation under a new regime. With unprecedented access to Thabo Mbeki and the top brass in the African National Congress, Mark Gevisser weaves a nuanced portrait of the black experience under apartheid. Revelations about the current president and the politics that continue to shape South Africa include:

- Thabo Mbeki's difficult relationship with his own political activist and largely absent father Govan Mbeki, who was imprisoned on Robben Island with Nelson Mandela.

- How the death of his son Kwanda in the diamond mines and the murder of his brother Jama directly affected his leadership and will continue to shape the governance of Africa for years to come.

- The reasons behind Mbeki's puzzling refusal to admit that the HIV virus causes AIDS, which in South Africa claims 800 lives per day, and his support of corrupt governments such as Zimbabwe's.

- Inside rivalry between Thabo Mbeki and Jacob Zuma, the populist leader destined to take over as president in 2009.
This accessible account of a monumental period in world history is the definitive look at contemporary South Africa.

'..a towering biography...It has now been abridged but simultaneously expanded with a substantial epilogue that broadens into an illuminating assessment of the current situation. In its original form it was, with good reason, widely acclaimed and distinguished with several prizes, notably the Alan Paton Award; in its new format it is a brilliant analysis of past equivocations and present blundering, opening into a view of future challenges...A Legacy of Liberation is memorable and definitive. Accompanying Mbeki on his life journey, Gevisser is both informative and moving, passionate and dispassionate.' 4 out of 5 stars. André Brink, The Telegraph

'The best [of four new books about South Africa], Mark Gevisser's A Legacy of Liberation: Thabo Mbeki and the Future of the South African Dream seeks to understand how a man who came to power with so much goodwill behind him is today regarded with hostility...Gevisser carefully listens to his subject and those around him before artfully dissecting his thinking.' Chris McGreal, The Observer

'...irresistible detail about Mbeki in Britain in the 1960s.' - Stephen Robinson, Sunday Times

'An impressive feat of journalism (that) offers some intriguing insights.' - New York Times

'Mark Gevisser has written one of the great epic books to come out of South Africa since the end of apartheid. Rigorously reported, beautifully written, A Legacy of Liberation is at once a rich social history of the black experience under apartheid - as seen through its leaders, movements and people - and a brilliant expedition through the country's political and personal landscape, past, present and future.' – Katrina Vanden Heuvel, publisher of The Nation and editor of A Just Response and A Dictionary of Republicanism

'If Thabo Mbeki has been an enigma to the West, no one better explains him, how he got that way, and how it affected his place in the history of South Africa - old and new - than Mark Gevisser. Exhaustive research, incredible and impeccable contacts and the skill of a gifted writer and analyst combine to make this one of the best chronicles of a man and a movement in our time.' - Charlayne Hunter-Gault, Special Africa Correspondent, NPR and author New News Out of Africa: Uncovering the African Renaissance

'This is the finest book I have read out of post-apartheid South Africa. Mark Gevisser makes sense not only of Thabo Mbeki but of the struggle itself, and he does so in lucid, brilliant prose.' – Lynn Freed, author of The Servants' Quarters

'This extraordinary biography draws the reader into the multilayered world in which Mbeki rose to leadership and shaped the destiny of millions. A splendid contribution to our understanding of contemporary South Africa.' - Gail M. Gerhart, author of Black Power in South Africa

'Mark Gevisser has given us a wonderfully readable study of a powerful man's character: he shows how Thabo Mbeki shaped, and was shaped by, South Africa's troubled history. After a decade interviewing key players in the liberation struggle and their sometimes forgotten families, Gevisser writes with both compassion and a keenly critical eye. A fine wordsmith with an eye for evocative detail, he exposes the demons besetting the South African dream. A Legacy of Liberation is crucial for understanding what lies ahead for South Africa in the twenty-first century.' – Diana Wylie, author of Art and Revolution

'Probably the finest piece of non-fiction to come out of South Africa since the end of apartheid' - Martin Plaut, Times Literary Supplement

'Cerebral yet intimate, and beautifully written' - Richard Calland, The Daily Mail and The Guardian

'Anyone who wants to go beyond those clichés, and also to understand what has happened in South Africa since the end of white rule should read [this]. In the process they will get swept up in an extraordinarily compelling and at times infuriating and tragic story...Far and away the most authoritative book on Nelson Mandela's successor...Gevisser – one of South Africa's foremost journalists – writes with passion and conviction...Neither simplistic nor synthetic. Rather it is one of the great explanatory narratives of South Africa over the past 60-odd years'  - Alec Russell, Financial Times Magazine

'Retraces in great detail the president's life from his childhood in rural Transkei to his 28 years in exile and his ascent to power. In the process he sheds considerable light on more than half a century of South Africa's difficult history...essential reading for anyone intrigued by South Africa's complex philosopher-king' - The Economist

'Deep and fascinating [study]...a human portrait of a man variously called an enigma, Machiavellian, an intellectual, a visionary and Stalinist' - The Times (SA)

'...the painstakingly researched narrative remains a judicious and an eye-opening account of a life intersecting history at the most profound level.' - Publishers Weekly

'A thrilling tale told by Gevisser, beautifully written and thoroughly investigated to give an account of the South African dream, its past, present and yet still contested and complicated future.' - Chartist

'Re-titles, updates and cut to half the originial length, it is an engrossing narrative, told with passion and particularly vivid in its depiction of the cultural borderland in which Mbeki grew up.' - David White, Survival

'...a rich work of contemporary history...' The Round Table

'...when the histories come to be written, Mbeki's role as one of the architects of change will be crucial.  Gevisser has laid the foundations for those histories with his incisive, personal, richly anecdotal and politically astute narrative.  It is a "must read" book that informs, inspires and elucidates the man and his mission.' Tribune

1. Legacy Of Liberation: Thabo Mbeki And The Future Of The South African Dream

2. A Legacy of Liberation: Thabo Mbeki and the Future of the South African Dream

3. A Legacy of Liberation: Thabo Mbeki and the Future of the South African Dream (0)

4. A Legacy of Liberation: Thabo Mbeki and the Future of the South African Dream Gevisser, Mark