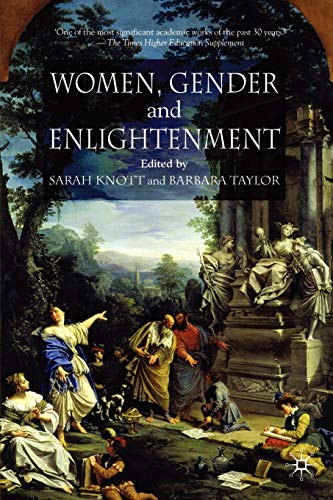 Did women have an Enlightenment? Historians have long excluded women from the Enlightenment orbit. However, competing images of 'Woman' loomed large in Enlightenment thought, and women themselves - as scientists and salonniÞres, bluestockings and governesses, political polemicists and novelists - contributed much to enlightened intellectual culture. This path-breaking volume of interdisciplinary essays by forty leading scholars provides a detailed picture of the controversial, innovative role played by women and gender issues in the age of light.

'Women, Gender, and Enlightenment is one of those rare collections that has it all. Combining searching historiographical essays with scholarly discussions of specific authors, this volume has an exceptionally wide reach, covering questions of sex, gender and politics as they emerged in Enlightenment France, England, Spain, Italy, Scotland and the American Colonies. But thanks to the authoritative introductions to each section and to the two concluding essays that take stock of the entire volume, Women, Gender, and Enlightenment does not feel uneven or miscellaneous but is instead animated by a spirit of collaboration. A marvellous and compelling book.' - Claudia L Johnson, author of Equivocal Beings: Politics, Gender and Sentimentality in the 1790s

'The most comprehensive, diverse and stimulating account of women and gender in any era: an astonishing collective achievement'. - John Brewer, author of The Pleasures of the Imagination: English Culture in the Eighteenth Century

'The cumulative effect of this volume is stunning, in part because the repetitions and contradictions do at least highlight the different ways in which events, ideas and personalities can be interpreted, depending on the lens applied. A respect for multiple perspectives, an unwillingness to scorn the past, an interest in the many routes by which one can arrive at a given place - all these things make this volume a true work of collaboration and a landmark contribution to historical scholarship.' - TLS

'This book is a marvellous treasure house of ideas and scholarship: the editors have produced one of the most significant academic works of the past 30 years...The particular significance of Sarah Knott and Barbara Taylor's collection is that it makes us think, in the most detailed and precise way, about an issue that in the view of many of us in the social sciences and the humanities is of central importance. The question is that of the relationship of gender to knowledge...This volume, through placing women at the heart of Enlightenment debates about social change, allows us to see again that Kant and Descartes also left the beaten path, and that the true spirit of the Enlightenment was not synonymous with those detailed questions of social organisation with which it became embroiled in the 19th century. In the 17th and 18th centuries, women dared to know long before Kant had thought of the phrase. That daring is now given its voice in this brilliant collection.' - Mary Evans, THES

'The sheer size of Women, Gender and Enlightenment, with its thirty-five essays, several section introductions and biographies indicates not only the variety of the subject matter, but also the variety of approaches to this material.' - Corinna Wagner, History of Political Thought
'An imposing achievement...Barbara Taylor and Sarah Knott have organized and guided to completion an exceptionally timely book. More than any other volume I know, Women, Gender and Enlightenment registers the force of the impact that feminist scholarship has had, and will continue to have, on the study of the Enlightenment and on the historical discipline as a whole. Aside from its huge importance for Enlightenment studies, the volume both marks the accomplishments of the historical study of women and gender and points us in new directions. It may also prove to be a pivotal moment in the development of feminism itself.' - Anthony LaVopa, Journal of Modern History

'While dozens of books have anticipated pieces of the arguments made in this volume, never has so extensive an attempt been made to pull them together into a cohesive whole. The volume can be seen not only as a step towards a new synthesis but as the culmination of several decades of work in both Enlightenment studies and women's studies.' - Ruth H. Bloch, Modern Intellectual History

BARBARA TAYLOR is Reader in History at the University of East London, UK, and author of Eve and the New Jerusalem (1983) and Mary Wollstonecraft and the Feminist Imagination (2003). She was Director of the 'Feminism and Enlightenment' research project (1998-2001).

SARAH KNOTT is Assistant Professor in History at Indiana University, USA, and at work on a history of sensibility in revolutionary America. She was research fellow on the 'Feminism and Enlightenment' project.

8. Women, Gender and Enlightenment [Paperback] Taylor, B. and Knott, S.