Items related to What Soldiers Do: Sex and the American GI in World...

Roberts, Mary Louise What Soldiers Do: Sex and the American GI in World War II France

What Soldiers Do: Sex and the American GI in World War II France 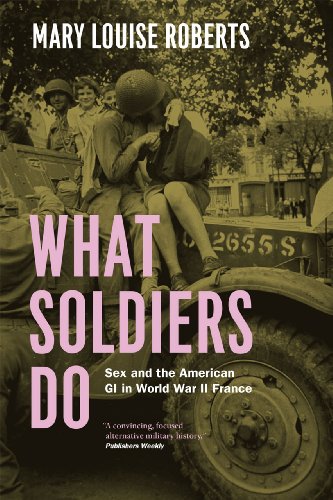 How do you convince men to charge across heavily mined beaches into deadly machine-gun fire? Do you appeal to their bonds with their fellow soldiers, their patriotism, their desire to end tyranny and mass murder? Certainly—but if you’re the US Army in 1944, you also try another tack: you dangle the lure of beautiful French women, waiting just on the other side of the wire, ready to reward their liberators in oh so many ways.

That’s not the picture of the Greatest Generation that we’ve been given, but it’s the one Mary Louise Roberts paints to devastating effect in What Soldiers Do. Drawing on an incredible range of sources, including news reports, propaganda and training materials, official planning documents, wartime diaries, and memoirs, Roberts tells the fascinating and troubling story of how the US military command systematically spread—and then exploited—the myth of French women as sexually experienced and available. The resulting chaos—ranging from flagrant public sex with prostitutes to outright rape and rampant venereal disease—horrified the war-weary and demoralized French population. The sexual predation, and the blithe response of the American military leadership, also caused serious friction between the two nations just as they were attempting to settle questions of long-term control over the liberated territories and the restoration of French sovereignty.

While never denying the achievement of D-Day, or the bravery of the soldiers who took part, What Soldiers Do reminds us that history is always more useful—and more interesting—when it is most honest, and when it goes beyond the burnished beauty of nostalgia to grapple with the real lives and real mistakes of the people who lived it.

"In this vivid account of GIs in wartime France, Mary Lou Roberts documents how the Greatest Generation was sometimes as badly behaved beyond the battlefield as it was brave in combat. What Soldiers Do is not a conventional history. It deeply--and often colorfully--textures our understanding of the experiences of men at war, the contours of mid-twentieth-century sexual (and racial) mores, and the frequently ignorant and even lurid attitudes toward other peoples that attended America's ascent to global hegemony."

"Mary Louise Roberts's provocative counter-narrative of America's 'good war' reveals the fraught entanglements of gender and race, sex, sexual violence and racism, commerce and romance, in the Franco-American encounter from D-day through the first year of uneasy peace. Rigorously researched and evocatively written, What Soldiers Do analyses the centrality, both material and symbolic, of women and their bodies to France's ambiguous relationship as a liberated but dishonored nation with the newly dominant American victors and demonstrates yet again--in disturbing detail--how much 'foreign affairs' are indeed about sex and gender."

"This is a book that matters. It will provoke heated discussion and critical responses from those who are made uncomfortable by its arguments, and those arguments merit engagement both by those who agree and by those who might not want to face the evidence that the author has gathered so expertly. The prose is bracingly clear, the argument is free of sensationalist exaggeration, and, most important, it is persuasive. This remarkable book deserves to be widely read."

"This remarkable book attacks the myth of the 'Greatest Generation' by showing that young Americans went to war in Europe to find sex rather than to sacrifice themselves for Europe's salvation. It stands as a corrective to all the best-selling celebratory renderings of World War II in the United States over the past quarter century. It will be shocking and controversial."

"This clear-eyed examination of what randy American soldiers got up to in France from D-Day through 1946 strips away the sentimentality from the overworked, clichéd portrayal of the Greatest Generation." --Publishers Weekly

"Carefully, keeping her anger in check, and with wit, deep research, and telling vignettes, Mary Louise Roberts has given us a masterful study of sexual transactions between American GIs and French women in the Second World War. . . . In excavating and analyzing the story, Roberts is superb--asking the right questions, digging for answers, scrupulously considering all possibilities, and openly admitting the unknowns. . . . Roberts's book is an extremely important contribution to a matter badly neglected, even among anti-war scholars."--Dissent

"A remarkable study that complicates the view of the liberation of France and casts doubt on the moral character of the vaunted 'greatest generation'of Americans. She vividly depicts the impact of the influx of hundreds of thousands of GIS on French society, especially on French women. . . . A powerful reminder of the dark side of the liberation."--Foreign Affairs

"Throughout this book the links between sex, the body, national and transnational politics are made plain. While some readers may query the argument that the behaviour of GIs can be conceptualised as the 'growing pains' of a nation moving into world leadership, many will appreciate this nuanced history of sex, war and power. The sexual behaviour of an army, and the sexual abuse it propagates, are to do with more than the personal choices of select individuals. Looking beyond 'a few bad hats', as British Army officers are wont to say of abusers, is instructive, not just for a deeper understanding of the complex liberation of France but also of the broader links between military power, sexual dominance and gender relations."

"An excellent example of how attention to gender, sexuality, and race transforms understanding of historical processes."--Journal of Modern History About the Author:

Mary Louise Roberts is professor of history at the University of Wisconsin-Madison and the author of Disruptive Acts: The New Woman in Fin de Siecle France and Civilization without Sexes: Reconstructing Gender in Post-war France, 1918-1928.

1. What Soldiers Do: Sex and the American GI in World War II France (Paperback)

Book Description The University of Chicago Press, United States, 2014. Paperback. Condition: New. Reprint. Language: English. Brand new Book. What Soldiers Do presents a devastating new perspective on the Greatest Generation and the liberation of France, one in which the US military use the lure of easy, sexually available French women to sell soldiers on the invasion, thus unleashing a "tsunami of male lust" among the war-weary GIs. The resulting chaos-ranging from flagrant public sex with prostitutes to outright rape and rampant venereal disease - horrified the battered and demoralized French population and caused serious friction between the two nations at a crucial point as the war drew to a close. Seller Inventory # AAH9780226923116

3. What Soldiers do and#8211; Sex and the American GI in World War II France

5. What Soldiers Do: Sex and the American GI in World War II France

6. What Soldiers do and#8211; Sex and the American GI in World War II France

7. What Soldiers Do: Sex and the American GI in World War II France

8. What Soldiers Do: Sex and the American GI in World War II France

9. What Soldiers do Sex and the American GI in World War II France