Items related to Peoples on Parade: Exhibitions, Empire, and Anthropology...

Peoples on Parade: Exhibitions, Empire, and Anthropology in Nineteenth-century Britain 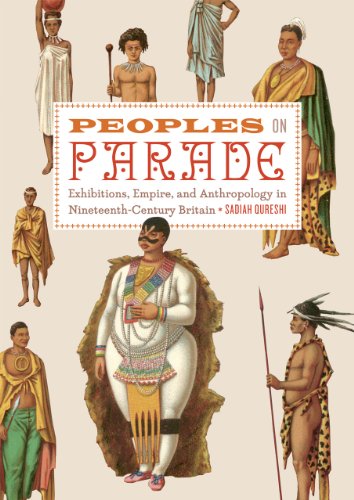 In May 1853, Charles Dickens paid a visit to the "savages at Hyde Park Corner," an exhibition of thirteen imported Zulus performing cultural rites ranging from songs and dances to a "witch-hunt" and marriage ceremony. Dickens was not the only Londoner intrigued by these living "savages": such shows proved to be some of the most popular public entertainments of their day. By the end of the century, performers were being imported by the hundreds and housed in purpose-built "native" villages for months at a time, delighting the masses and allowing scientists and journalists the opportunity to reflect on racial difference, foreign policy, slavery, missionary work, and empire. "Peoples on Parade" provides the first substantial overview of these human exhibitions in nineteenth-century Britain. Sadiah Qureshi tells the story of how such shows developed into commercially successful entertainments, their lasting scientific importance, and the diverse ways in which they were experienced and interpreted by the showmen, performers, and patrons. Through Qureshi's vibrant storytelling and stunning images, readers will see how human exhibitions have left behind an institutional legacy both in the formation of early anthropological inquiry and in the creation of broader public attitudes toward racial difference.

"Beautifully written, and rich in detail. . . . The work will appeal to scholars interested in imperialism, history of race, Victorian popularizers of science and nineteenth-century visual culture. There can be little doubt that it will feature on most course reading lists relating to the history of nineteenth-century science."--Efram Sera-Shriar, York University, Canada "British Journal for the History of Science "

"The originality of this book and the importance of its contribution lies in the way Qureshi brings together various strands of nineteenth-century British history: the changing social landscape of the metropole, the networks of empire, and the diffuse origins of scientific ideas."--Radhika Natrajan, University of California, Berkeley "Invisible Culture "

"[This] interesting, informative, and quite beautiful book is a great service to anthropology."
--Jack David Eller "Anthropology Review Database "

"[A] fascinating argument, a dizzying tour of the ethnic entrepreneurship of Victorian London supported by the brilliant visual evidence of posters, playbills, postcards and ephemera. As a decisive statement of how entertainment and ethnography coalesced in the fertile Petri dish of Victorian popular culture, resulting in far more subtle and contingent consequences than is permitted by reductionist assumptions of endemic nineteenth-century racism, Peoples on Parade is a brave, stimulating and important book."--Geoffrey A. C. Ginn, University of Queensland "Australian Journal of Politics and History "

"[E]ntertaining and instructive. . . . [T]he vividness, humour, poignancy and humanity of the relationships between showmen, public, and the participants on parade make for irresistible reading."

"Expertly researched and academically stimulating, . . [t]his book contributes to a growing body of literature that succeeds in providing an in-depth, interdisciplinary approach to the history of science through the lens of visual culture. Highly recommended."

"A lavish, beautifully produced, and exotically illustrated spectacle. . . . This is an excellent and compelling book with a wide appeal: essential reading for those with a scholarly interest in the history of anthropology, race, and metropolitan cultures of empire but highly rewarding for those with a more casual interest in Victorian Britain and popular entertainment."--Historian

"Peoples on Parade is an important book that maps shifting perceptions of the relationships among spectacle, science, and race and reveals the ways in which exhibitions of non-Western peoples contributed to dynamic and contentious debates about human variation. Qureshi contributes to the vibrant scholarship on the relationship between popular culture and the cultures of nineteenth-century science, as well as consolidating arguments about the nature of Britain's metropolitan imperial culture."--Cultural and Social History About the Author:

Sadiah Qureshi is an affiliated scholar in the Department of History and Philosophy of Science at the University of Cambridge and senior research fellow in the Cambridge Victorian Studies Group.

1. Peoples on Parade: Exhibitions, Empire, and Anthropology in Nineteenth-Century Britain

Book Description 2011. Hardcover. Condition: New. Hardcover. In May 1853, Charles Dickens paid a visit to the savages at Hyde Park Corner, an exhibition of thirteen imported Zulus performing cultural rites ranging from songs and dances to a witch-hu.Shipping may be from multiple locations in the US or from the UK, depending on stock availability. 384 pages. 1.157. Seller Inventory # 9780226700960

Book Description 2011. Hardcover. Condition: New. Hardcover. In May 1853, Charles Dickens paid a visit to the savages at Hyde Park Corner, an exhibition of thirteen imported Zulus performing cultural rites ranging from songs and dances .Shipping may be from our Sydney, NSW warehouse or from our UK or US warehouse, depending on stock availability. 384 pages. 1.157. Seller Inventory # 9780226700960

4. Peoples on Parade: Exhibitions, Empire, and Anthropology in Nineteenth-Century Britain

5. Peoples on Parade: Exhibitions, Empire, and Anthropology in Nineteenth-Century Britain