Items related to Old Thiess, a Livonian Werewolf: A Classic Case in... 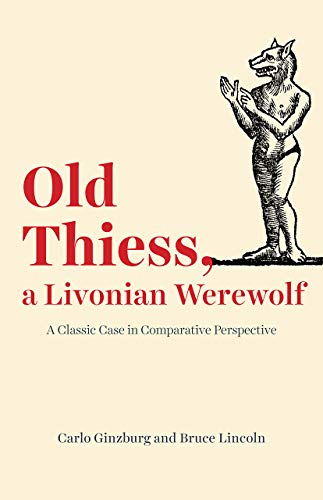 Book Description The University of Chicago Press, United States, 2020. Paperback. Condition: New. Language: English. Brand new Book. In 1691, a Livonian peasant known as Old Thiess boldly announced before a district court that he was a werewolf. Yet far from being a diabolical monster, he insisted, he was one of the "hounds of God," fierce guardians who battled sorcerers, witches, and even Satan to protect the fields, flocks, and humanity--a baffling claim that attracted the notice of the judges then and still commands attention from historians today. In this book, eminent scholars Carlo Ginzburg and Bruce Lincoln offer a uniquely comparative look at the trial and startling testimony of Old Thiess. They present the first English translation of the trial transcript, in which the man's own voice can be heard, before turning to subsequent analyses of the event, which range from efforts to connect Old Thiess to shamanistic practices to the argument that he was reacting against cruel stereotypes of the "Livonian werewolf" a Germanic elite used to justify their rule over the Baltic peasantry. As Ginzburg and Lincoln debate their own and others' perspectives, they also reflect on broader issues of historical theory, method, and politics. Part source text of the trial, part discussion of historians' thoughts on the case, and part dialogue over the merits and perils of their different methodological approaches, Old Thiess, a Livonian Werewolf opens up fresh insight into a remarkable historical occurrence and, through it, the very discipline of history itself. Seller Inventory # AAH9780226674414

3. Old Thiess, a Livonian Werewolf and#8211; A Classic Case in Comparative Perspective

Book Description Paperback. Condition: New. Paperback. In 1691, a Livonian peasant known as Old Thiess boldly announced before a district court that he was a werewolf. Yet far from being a diabolical monster, he insisted, he was one of the hou.Shipping may be from multiple locations in the US or from the UK, depending on stock availability. 272 pages. 0.382. Seller Inventory # 9780226674414

7. Old Thiess, a Livonian Werewolf and#8211; A Classic Case in Comparative Perspective

Book Description 2020. Condition: NEW. 9780226674414 This listing is a new book, a title currently in-print which we order directly and immediately from the publisher. For all enquiries, please contact Herb Tandree Philosophy Books directly - customer service is our primary goal. Seller Inventory # HTANDREE02174095