Items related to Notebooks for "The Idiot"

Notebooks for "The Idiot" 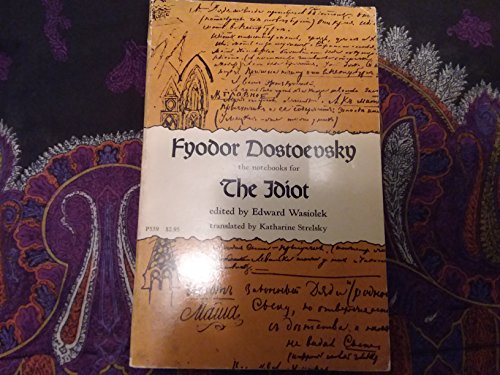 Written in the midst of squalid poverty engendered by the author's compulsive gambling, The Idiot began as one story and ended as quite another. Dostoyevsky's notebooks reveal at least eight plans for the tale, with numerous variations on each plan. This unique document of his creative process is illustrated by facsimiles of original pages from the notebooks. "Superbly edited ... and well translated." ― The New York Times Book Review.

With his sympathetic portrayals of the downtrodden of 19th-century Russian society, Fyodor Dostoyevsky (1821 - 1881) exercised immense influence on modern writers. His novels featured profound philosophical and psychological insights that anticipated the development of psychoanalysis and existentialism.
Translator and editor Edward Wasiolek is the Avalon Foundation Distinguished Service Professor of Slavic and Comparative Literature and Chairman of the Committee on Comparative Studies in Literature at the University of Chicago.
Editor, translator, and researcher Katharine Anderson Strelsky published numerous translations of works in French, Italian, and Russian and co-edited Alexandra Tolstoy's autobiography, Out of the Past.

1. The Notebooks for The Idiot

Book Description University of Chicago Press, 1973. Condition: Good. Ships from the UK. Former Library book. Shows some signs of wear, and may have some markings on the inside. Seller Inventory # 18859061-20

2. The Notebooks for the Idiot

3. The Notebooks for the Idiot

4. Dostoevsky: The Notebooks for the Idiot