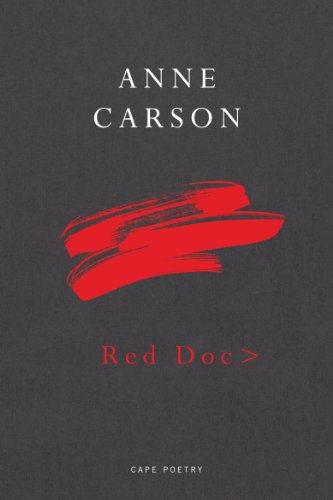 In a stunningly original mix of poetry, drama, and narrative, Anne Carson brings the red-winged Geryon from Autobiography of Red, now called ‘G’, into manhood, and through the complex labyrinths of the modern age. We join him as he travels with his friend and lover ‘Sad’ (short for Sad But Great), a war veteran, and with Ida, an artist, across a geography that ranges from plains of glacial ice to idyllic green pastures; from a psychiatric clinic to the sombre house where G’s mother must face her death. Haunted by Proust, juxtaposing the hunger for flight with the longing for family and home, this deeply powerful picaresque verse invites readers on an extraordinary journey of intellect, imagination, and soul.

"I have never read a poet where there was such a sense that the material was so unruly it might overwhelm its creator. It is this that makes Carson exciting... She writes with spendthrift ease." (Kate Kellaway Observer)

"To engage so originally and compellingly with a story first told more than 3,000 years ago, is astonishing: her ambition is one thing, the fact that it is so completely achieved is, frankly, something else... Carson is, simply, one of the very best." (Sarah Crown Guardian)

"[Carson’s] work over the last three decades has the flux of tidal waters. Words deceptively simple become in context an exhilarating tsunami of images with a shift in typographical structure." (Hayden Murphy Herald)

"‘A true poet, in the sense that she makes the unfamiliar seem real, and the real seem fabulous.’" (Richard Eyre, Start the Week)

"The narrative poem plays delightfully with form, at times approaching stream of consciousness in the vivid interplay of memory and dialogue." (Financial Times)

A literary event: a follow-up to the internationally acclaimed poetry best-seller Autobiography of Red (‘Amazing’ – Alice Munro) that takes its mythic boy-hero into the twenty-first century to tell a story all its own of love, loss, and the power of memory. Shortlisted for the 2013 T.S. Eliot Prize.

Book Description Jonathan Cape, 2013 9780224097574, 2013. Soft cover. Condition: New. Fine paperback. 164 pages. From the blurb: "In a stunningly original mix of poetry, drama and narrative, Anne Carson brings the red-winged Geryon from Autobiography of Red.into manhood, and through the complex labyrinth of the modern age." Shortlisted for the T.S. Eliot Prize and a Poetry Book Society choice. Susan Sontag, no less, wrote that Anne Carson is "one of the few writers writing in English that I would read anything she wrote". Seller Inventory # 1313