Items related to It's Not About The Bike: My Journey Back to Life

Lance Armstrong It's Not About The Bike: My Journey Back to Life

It's Not About The Bike: My Journey Back to Life 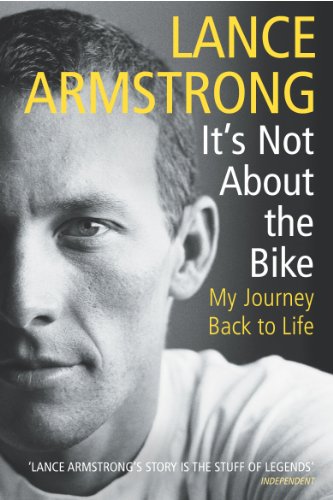 "I want to die at a hundred years old after screaming down an Alpine descent on a bicycle at 75 miles per hour. I don't do anything slow, not even breathe. I do everything at a fast cadence: eat fast, sleep fast."

At twenty-four, Lance Armstrong was already well on his way to becoming a sporting legend. Then, in October 1996, he was diagnosed with stage four testicular cancer - doctors gave him a 40% chance of survival. On that day Armstrong's life changed for ever and in typical fashion, he met the challenge head on - this was one fight he was determined not to lose.

As he battled against the cancer invading his body and the chemotherapy that threatened to sap his soul, he focussed on his training and drew strength from the people around him who never gave up. Just sixteen months after Armstrong was discharged from hospital, he entered the Tour de France, a race famed for its gruelling intensity. Just a few months after that, he became a father.

It's Not About the Bike is the story of one man's inspirational battle against the odds, charting his progress through triumph, tragedy and transformation.

It's Not About The Bike was first published in May 2000. In an interview with Oprah Winfrey in January 2013, Lance Armstrong admitted to having taken performance enhancing drugs in all seven of the Tours de France in which he competed between 1999 and 2005. He was officially stripped of these wins by the UCI, the world governing body for cycling, in 2012.

People around the world have found inspiration in the story of Lance Armstrong--a world-class athlete nearly struck down by cancer, only to recover and win the Tour de France, the multiday bicycle race famous for its gruelling intensity. Armstrong is a thoroughgoing Texan jock, and the changes brought to his life by his illness are startling and powerful, but he's just not interested in wearing a hero suit. While his vocabulary is a bit on the he-man side (highest compliment to his wife: "she's a stud"), his actions will melt the most hard-bitten souls: a cancer foundation and benefit bike ride, his astonishing commitment to training that got him past countless hurdles, loyalty to the people and corporations that never gave up on him. There's serious medical detail here, which may not be for the faint of heart; from chemo to surgical procedures to his wife's in vitro fertilization, you won't be spared a single x-ray, IV drip, or unfortunate side effect. Athletes and coaches everywhere will benefit from the same extraordinary detail provided about training sessions--every aching tendon, every rainy afternoon, and every small triumph during his long recovery is here in living colour. It's Not About the Bike is the perfect title for this book about life, death, illness, family, setbacks, and triumphs, but not especially about the bike. --Jill Lightner, Amazon.com

"If you read one sports book this year, this is the one" (Express on Sunday)

"This is a gripping story" (Guardian)

"Having nearly lost his life Lance Armstrong serves up his story for the rest of the world to wonder at, shudder at and learn from" (Guardian)

"Armstrong’s tale of his recovery from cancer remains compelling and inspirational. It has already brought comfort to millions of sufferers and their families, and will continue to do so" (Daniel Friebe Outdoor Fitness)

2. It's Not about the Bike: My Journey Back to Life

3. It's Not about the Bike: My Journey Back to Life

4. It's Not About the Bike (Paperback)

Book Description 2001. Paperback. Condition: New. Paperback. The remarkable true story of how Lance Armstrong came back from a fight against cancer to win the sporting world's most physically and mentally demanding event - the Tour de .Shipping may be from our Sydney, NSW warehouse or from our UK or US warehouse, depending on stock availability. 304 pages. 0.244. Seller Inventory # 9780224060875

5. It's Not About the Bike: My Journey Back to Life

6. It's Not about the Bike: My Journey Back to Life Armstrong, Lance

7. It's Not about the Bike: My Journey Back to Life