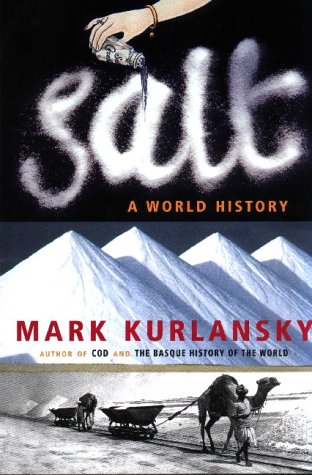 Homer called salt a divine substance, while Plato described it as especially dear to the gods. Kurlansky blends political, commercial, scientific, religious and culinary records into this history of the substance which he claims shaped civilization from the beginning.

Very early in his book, Kurlansky refers to an essay by the psychoanalyst Ernest Jones on man's obsession with salt. Whether or not man, in general, has an obsession with salt may be debatable. That one man in particular--Mark Kurlansky--has, is made more than clear by this unusual and enjoyable book. He seems to have set out to put between the covers of one volume every single fact about the history of man's relationship with salt that he could unearth. How the Ancient Greeks salted their tuna. Why the Mayans used salt as a medicine in healing rituals. The story of the great salt merchants of China. The French tax on salt and how its injustice contributed to the French Revolution. Why Gandhi chose salt as a symbol of the Raj's oppression. Kurlansky ranges through the centuries and across the world to tell the story of salt. As a prize-winning food writer he is particularly good on the ways salt has shaped our eating habits and once again, as in his earlier book Cod, he seasons his text with recipes he has come across in his research. In the course of 450 pages the reader may occasionally feel that here is a book that tells one more about salt than one wants to know but, for most of those pages, Kurlansky's enthusiasm, knowledge and style create an engrossing tale.--Nick Rennison

'An extraordinary little book, unputdownable, a compulsive read.' -- Review of Cod from The Express on Sunday