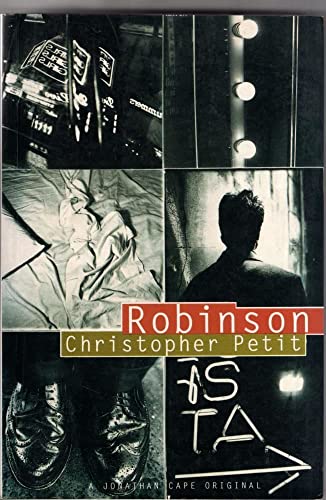 Set in London, this novel tells the story of Robinson, and it is a story of moral seduction. The narrator is drawn into Robinson's web, starts to drink too much, abandons his wife and job and eventually starts working for Robinson, first running a second-hand bookshop and second as an editor for Robinsons's increasingly bizarre and pornographic films. The book becomes increasingly intense - the weather worsens, London collapses, the moral uncertainties grow - and the images grow and proliferate- the sea, storms, death by drowning. At one level a traditional novel of character - Robinson and Cookie, time - the present and place - London, it is also a story of moral degeneration, voyeurism and sexual collusion.

Chris Petit's novel Robinson triumphs as a portrayal of a life spiralling out of control and of the bleak anonymity of the city of London. His narrator, bored and indifferent to domesticity and the dead rituals of office life, meets the enigmatic Robinson and falls under his curious charm.

It is interesting, though not essential to the enjoyment of the novel, to know a little of the history of Robinson the literary character. He seems to first turn up in 1932 in Louis-Ferdinand Céline's masterpiece, Journey to the End of the Night. He then goes underground for a while before emerging over a decade later in the strange and electrifying poems of Weldon Kees. Another disappearance, along with Kees's own, a gap of a further 30 years or so, and Robinson emerges in the poetry of Simon Armitage.

Petit has used the slowly emerging Robinson mythos to good advantage, adding and building on it, creating a novel that h as much in common with the tone of Céline and the Kees poems; here also is a novel that journeys through the night. Robinson is beguiling, mysterious, strangely familiar, charming, deceitful, dangerous, tragic and wilful. Petit's narrator slowly allows himself to be sucked into Robinson's seedy world, permitting Robinson's will to manipulate his own. He becomes a willing sidekick to Robinson's increasingly dangerous and depraved enterprises.

Petit intended the novel to be set in the near future and certain parts of the later stages of the novel read like Briti sh news summaries from the autumn of 2000. It is a credit to Petit's keen eye for all that is monstrous and messy in British society that this is so. It is also slightly worrying, for one is left with the nasty feeling that some of the other dark events he has imagined might also lurk up and intrude on our daily lives. --Iain Robinson

Christopher Petit is a writer and filmmaker. Born in 1949, he was sent to school in Yorkshire where he received a Roman Catholic education. He currently reviews thrillers for The Times. His first film, Radio On (1979) was co-produced by Wim Wenders, and he has made three other feature films. His television work ranges from essays with writers Ian Sinclair and J. G Ballard to BBC documentaries on air stewardesses and the British weather. This is his first novel.

Book Description Paperback. Condition: Very Good. The book has been read, but is in excellent condition. Pages are intact and not marred by notes or highlighting. The spine remains undamaged. Seller Inventory # GOR002890257

Book Description Jonathan Cape Ltd, 1993. Paperback. Condition: Good. A few small marks to page edges Good condition is defined as: a copy that has been read but remains in clean condition. All of the pages are intact and the cover is intact and the spine may show signs of wear. The book may have minor markings which are not specifically mentioned. Most items will be dispatched the same or the next working day. Seller Inventory # wbb0013647967

Book Description Random House UK 1993-07-27, 1993. Paperback. Condition: Good. Item is in good condition. Some moderate creases and wear. This item may not come with CDs or additional parts including access codes for textbooks. Might be an ex-library copy and contain writing/highlighting. Seller Inventory # DS-0224035525-3