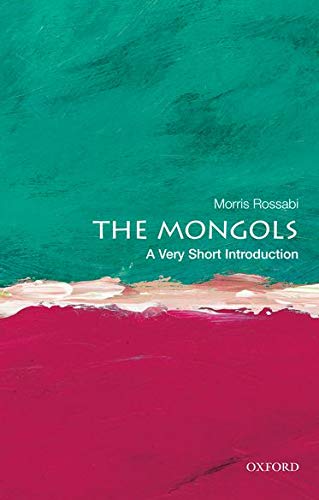 Professor of Chinese and Inner Asian History, Columbia University; Distinguished Professor of History, City University of New York; author of Khubilai Khan, Voyagerfrom Xanadu, China and Inner Asia, Modern Mongolia, and seven other books. Rossabi has lectured on Chinese and Mongolian history in Asia, Europe, and the U.S. Considered the world's leading expert on the Mongols.

Book Description Oxford University Press Inc, United States, 2012. Paperback. Condition: New. Language: English. Brand new Book. The Mongols carved out the largest land-based empire in world history, stretching from Korea to Russia in the north and from China to Syria in the south in the thirteenth century. Along with their leader Chinggis Khan they conjure up images of plunder and total destruction. Chinggis and his descendants introduced a level of violence that had perhaps never been seen in world history. Although this book does not ignore the devastation and killings wrought by the Mongols, it also reveals their contributions. Within two generations, they developed from conquerors and predators seeking booty to rulers who devised policies to foster the economies of the lands they had subjugated. Adopting political and economic institutions familiar to the conquered populations and recruiting native officials, they won over many of their non-Mongol subjects. Mongol nobles were ardent patrons ofart and culture. They supported and influenced the production of Chinese porcelains and textiles, Iranian tiles and illustrated manuscripts, and Russian metalwork. Their most significant contribution was to foster the greatest contacts among diverse civilizations in world history. The Mongol peace they imposed on much of Asia and their promotion of trade resulted in considerable travel and relations among numerous merchants, scientists, artists, missionaries, and entertainers of different ethnic groups. It is no accident that Europeans, including Marco Polo, first reached China in this period. Eurasian and perhaps global history starts with the Mongolempire.Rossabi follows the Mongol empire through to collapse due to internal disunity. Struggles for succession and ill-planned and expensive military campaigns ultimately tore apart one of the most influential empires in world history. ABOUT THE SERIES: The Very Short Introductions series from Oxford University Press contains hundreds of titles in almost every subject area. These pocket-sized books are the perfect way to get ahead in a new subject quickly. Our expert authors combine facts, analysis, perspective, new ideas, and enthusiasm to make interesting and challenging topics highly readable. Seller Inventory # BTA9780199840892

3. The Mongols: A Very Short Introduction

5. The Mongols: A Very Short Introduction

6. THE MONGOLS: A VERY SHORT INTROD

7. THE MONGOLS: A VERY SHORT INTROD

8. THE MONGOLS: A VERY SHORT INTROD

Book Description Paperback. Condition: New. Paperback. In the thirteenth and fourteenth centuries, the Mongols carved out the largest land-based empire in world history, stretching from Korea to Russia in the north and from China to Syria in t.Shipping may be from multiple locations in the US or from the UK, depending on stock availability. 136 pages. 0.136. Seller Inventory # 9780199840892