Items related to Freedom Riders: 1961 and the Struggle for Racial Justice...

Freedom Riders: 1961 and the Struggle for Racial Justice (Pivotal Moments in American History) 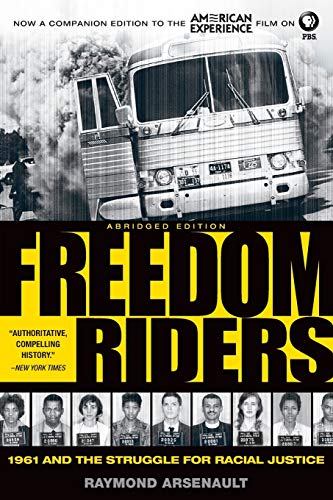 The saga of the Freedom Rides is an improbable, almost unbelievable story. In the course of six months in 1961, four hundred and fifty Freedom Riders expanded the realm of the possible in American politics, redefining the limits of dissent and setting the stage for the civil rights movement. In this new version of his encyclopedic Freedom Riders, Raymond Arsenault offers a significantly condensed and tautly written account. With characters and plot lines rivaling those of the most imaginative fiction, this is a tale of heroic sacrifice and unexpected triumph. Arsenault recounts how a group of volunteers-blacks and whites-came together to travel from Washington D.C. through the Deep South, defying Jim Crow laws in buses and terminals and putting their lives on the line for racial justice. News photographers captured the violence in Montgomery, shocking the nation and sparking a crisis in the Kennedy administration. Here are the key players-their fears and courage, their determination and second thoughts, and the agonizing choices they faced as they took on Jim Crow-and triumphed. Winner of the Owsley Prize Publication is timed to coincide with the airing of the American Experience miniseries documenting the Freedom Rides" Arsenault brings vividly to life a defining moment in modern American history." -Eric Foner, The New York Times Book Review" Authoritative, compelling history." -William Grimes, The New York Times" For those interested in understanding 20th-century America, this is an essential book." -Roger Wilkins, Washington Post Book World" Arsenault's record of strategy sessions, church vigils, bloody assaults, mass arrests, political maneuverings and personal anguish captures the mood and the turmoil, the excitement and the confusion of the movement and the time." -Michael Kenney, The Boston Globe

"A passionate, dazzlingly well written narrative account of the Freedom Rides, the dramatic direct actions that seemed to draw every great man (and woman) in the United States into their orbit."--Todd Moye, The Journal of Southern History

"Surely the definitive study on the topic.... Arsenault skillfully brings to life these important historical figures, revealing their courage, fear, motivations, and conflicts--both internal and external."--J.E. Branscombe, Southern Historian
"A meticulous, all-encompassing study of the 1961 Freedom Riders and their subsequent efforts. It is a must-read for all students of America's freedom movement."--Lee E. Williams II, The Alabama Review
"Drawing on personal papers, F.B.I. files, and interviews with more than 200 participants in the rides, Arsenault brings vividly to life a defining moment in modern American history.... Rescues from obscurity the men and women who, at great personal risk, rode public buses into the South in order to challenge segregation in interstate travel.... Relates the story of the first Freedom Ride and the more than 60 that followed in dramatic, often moving detail."--Eric Foner, The New York Times Book Review
"Authoritative, compelling history.... This is a story that only benefits from Mr. Arsenault's deliberately slowed-down narration. Moment by moment, he recreates the sense of crisis, and the terrifying threat of violence that haunted the first Freedom Riders, and their waves of successors, every mile of the way through the Deep South. He skillfully puts into order a bewildering series of events and leads the reader, painstakingly, through the political complexities of the time. Perhaps his greatest achievement is to show, through a wealth of detail, just how contested every inch of terrain was, and how uncertain the outcome, as the Freedom Riders pressed forward, hundreds of them filling Southern jails."--William Grimes, The New York Times
"For those interested in understanding 20th-century America, this is an essential book.... In his dramatic and exhaustive account of the Freedom Riders, Arsenault makes a persuasive case that the idealism, faith, ingenuity and incredible courage of a relatively small group of Americans--both white and black--lit a fuse in 1961 that drew a reluctant federal government into the struggle--and also enlarged, energized and solidified (more or less) the hitherto fragmented civil rights movement.... Arsenault tells the story in wonderfully rich detail. He explains how young people, knowing the brutality and danger that others had faced, nevertheless came to replace them--in wave after wave--to ride dangerous roads, to face lawless lawmen, to withstand the fury of racist mobs, to endure the squalor and danger of Southern jails--even the dreaded Parchman Farm in Mississippi."--Roger Wilkins, Washington Post Book World
"Compelling.... A complex, vivid and sympathetic history of a civil-rights milestone."--David Cohen, Philadelphia Inquirer
"Arsenault has written what will surely become the definitive account of these nonviolent protests.... Arsenault's fine narrative shows how the Freedom Rides were important journeys on the long road to racial justice."--Richmond Times-Dispatch
"This is a thrilling book. It brings to life a crucial episode in the movement that ended racial brutality in the American south, giving us both the bloody drama of the Freedom Rides and the legal and political maneuvering behind the scenes."--Anthony Lewis
"The Freedom Rides brought onto the national stage the civil rights struggle and those who would play leading roles in it.... Arsenault chronicles the Freedom Rides with a mosaic of what may appear daunting detail. But delving into Arsenault's account, it becomes clear that his record of strategy sessions, church vigils, bloody assaults, mass arrests, political maneuverings and personal anguish captures the mood and the turmoil, the excitement and the confusion of the movement and the time."--Michael Kenney, The Boston Globe
About the Author:

6. Freedom Riders: 1961 and the Struggle for Racial Justice (Pivotal Moments in American History)

7. Freedom Riders : 1961 and the Struggle for Racial Justice

8. Freedom Riders: 1961 and the Struggle for Racial Justice (Paperback or Softback)

9. Freedom Riders: 1961 and the Struggle for Racial Justice

10. Freedom Riders: 1961 and the Struggle for Racial Justice (Pivotal Moments in American History)