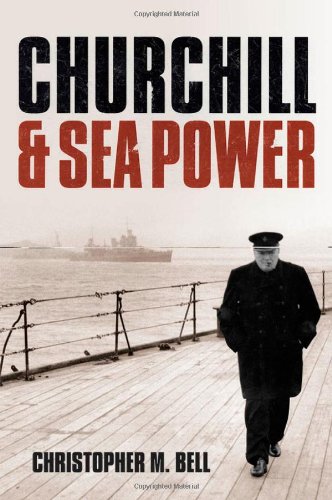 Winston Churchill had a longer and closer relationship with the Royal Navy than any British statesman in modern times, but his record as a naval strategist and custodian of the nation's sea power has been mired in controversy since the ill-fated Dardanelles campaign in 1915. Today, Churchill is regarded by many as an inept strategist who interfered in naval operations and often overrode his professional advisers - with inevitably disastrous results.

Churchill and Seapower is the first major study of Winston Churchill's record as a naval strategist and his impact as the most prominent guardian of Britain's sea power in the modern era. Based on extensive archival research, the book debunks many popular and well-entrenched myths surrounding controversial episodes in both World Wars, including the Dardanelles disaster, the Norwegian Campaign, the Battle of the Atlantic, and the devastating loss of the Prince of Wales and Repulse in 1941. It shows that many common criticisms of Churchill have been exaggerated, but also that some of his mistakes have been largely overlooked - such as his willingness to prolong the Battle of the Atlantic in order to concentrate resources on the bombing campaign against Nazi Germany.

The book also examines Churchill's evolution as a maritime strategist over the course of his career, and documents his critical part in managing Britain's naval decline during the first half of the twentieth century. Churchill's genuine affection for the Royal Navy has often distracted attention from the fact that his views on sea power were pragmatic and unsentimental. For, as Christopher M. Bell shows, in a period dominated by declining resources, global threats, and rapid technological change, it was increasingly air rather than sea power that Churchill looked to as the foundation of Britain's security.

The author of an outstanding first book on the Royal Navy between the world wars, Christopher M. Bell carefully examines Churchill's lengthy naval career in this superb new volume... Bell's detailed exegesis intends "not to absolve him of blame, but to understand his motives, assess the extent of his responsibility, and evaluate the soundness of the charges" against him. In this task the author succeeds admirably. (J. Garry Clifford, H-Net)

Ranging over events covering nearly half a century, this is an important addition to the already vast literature on Churchill as a military leader. Bell's volume rewards close reading. His final summation is measured and warranted. (Christopher H. Sterling, Finest Hour)

Bell's volume is a far-ranging, elegantly written and insightful analysis of Churchill's interest in seapower across the five decades that he was a major public figure. Perhaps surprisingly, Christopher Bell's reappraisal of Churchill demonstrates that detailed scrutiny even of the most famous of personalities can still pay major dividends. (Matthew Seligmann, Journal of Strategic Studies)

Bell's findings are based on extensive scholarly research: the Ten Year Rule episode, for instance, which reveals Churchill's peripheral role in the decision-making, is supported by numerous primary and secondary sources. (Military History Monthly)

This is a powerful and original case for the defence, based on extracting Churchill from the myth-history and putting him back into a realistic account of his times... Overall this is a cogent and important study based on a great deal of research. (N. A. M. Rodger, The Journal of Military History)

Even Churchill's greatest critics will have to make some revisions of their opinions after reading this important book. (Eric Grove, author of The Royal Navy Since 1915)

A very well argued defence of Winston Churchill against those who rebelled against his immense post-World War II prestige ... it is authoritative and rigorous, and a good read for naval history buffs. (Conrad Black, Standpoint)

What makes this book so readable and rewarding is its taut, paced development of Churchill as thinker, politician and Whitehall servant-we see his strategic world-view developing and we read his remarkably incisive, beautifully wrought appreciations of strategic dilemmas and problems. He was a vivid writer and clear thinker, and Bell has done the profession (and Churchill fans everywhere) a great service with this captivating text. (Geoffrey Wawro, History Book Club)

Christopher M. Bell is Associate Professor of History at Dalhousie University in Halifax, Nova Scotia. He is the author of The Royal Navy, Seapower and Strategy between the Wars (2000) and co-editor of Naval Mutinies of the Twentieth Century: An International Perspective (2003).